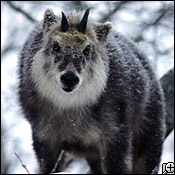 The Japanese serow is primarily a solitary bovid, although pairs and sometimes small family groups may occur.

It has a small home range that it marks by rubbing trees and rocks with the smelly secretions from glands located below its eyes and on its hooves.

It defends its territory by stabbing with its small horns, which both sexes possess. Sometimes the loser is seriously injured, even mortally.

The Japanese serow is ecologically out of balance. Once overhunted, it became so rare that the government of Japan declared it a national treasure. Since then, its numbers have rebounded and it now causes considerable damage to the forests in which it lives.

Historically, serow populations were probably kept in check by large predatory cats, which are now all gone.

Life Cycle: Little is known, believed to mate October to November; gestation about 210 to 225 days, one (sometimes two) fawns born