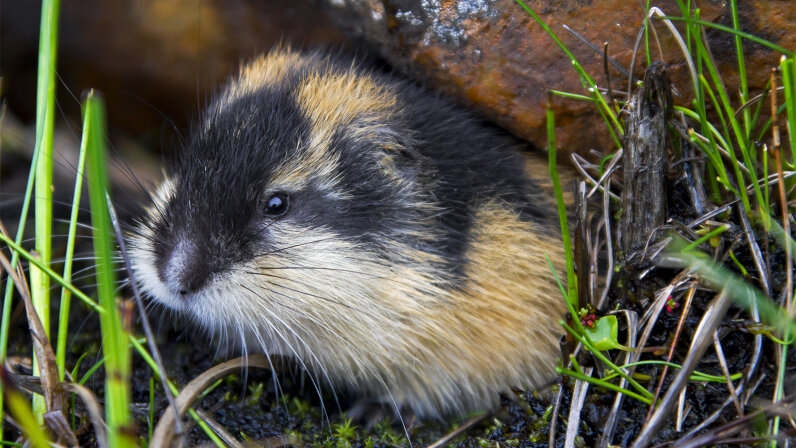 You've probably heard of a lemming before, but maybe just in context of a metaphor for someone so stupid they would follow a bunch of other people into a bad situation rather than think critically about their position and act according to their best judgment.

Lemmings are not impressionable people, however — they are actually a group of several species of small rodents native to the Arctic regions of the globe. They are stocky, short-tailed voles that burrow under the snow in winter, providing food for Arctic foxes and snowy owls, and spend the summer mating and eating mosses and grasses that aren't available in the winter. They migrate when food becomes scarce and can even swim across rivers and lakes when necessary. They also have the reputation for being extremely aggressive — rather than running away from a predator, they charge their attacker. They've even been known to attack humans studying lemmings.

So, why would these little creatures, interested in preserving life and limb to the point that they would fight a human or a weasel rather than be eaten, also commit suicide? The truth is, their reputation for jumping off sea cliffs en masse is a myth.

"This idea stems from the migrations observed in one lemming species: the Norwegian lemming," says Rolf Anker Ims, a researcher in the Department of Arctic and Marine Biology at the Arctic University of Norway, in an email interview. "During the peak years of this species, a large number of individuals migrate out of their normal habitat and die in large numbers. It's unclear what causes these migrations, but social stress, food shortage or predators are candidates. Suicide is not a good explanation."

The lemming suicide myth was popularized in the 1958 Disney film "White Wilderness" in which many lemmings were allegedly herded off a sea cliff so that the filmmakers could get dramatic footage of "lemming suicide." The footage convinced many people of the truth of lemming suicide, though the veracity of the footage was later called into question and the myth debunked.

Lemmings Are a Keystone Species

"Lemmings — and there are several species — are very important to the functioning of arctic ecosystems," says Ims. "Their cycles are necessary for the maintenance of arctic biodiversity through their role as prey and grazers of plants."

One way lemmings affect the ecosystems in the arctic has to do with a phenomenon called population cycling. In an ecosystem, populations of a specific species may fluctuate drastically over a predictable period of time. Population cycles happen in ecosystems all over the world, and rodents are a common group of animals to experience population cycles. These cycles can be driven by disease, food availability and predation.

Since lemming populations spike every few years — usually every three to five years, although, according to Ims, most lemming species don't peak in clockwork patterns like some other population cycling species. However, when they do, all the predators on the tundra that depend on lemmings for food — arctic foxes, hawks and jaegers, for instance — eat very well that year. This smorgasbord ends up having an impact on the entire tundra ecosystem.

On the other hand, population spikes in lemmings can be pretty destructive. During the summer months, lemmings eat nothing but living vegetation, and when lemming populations are at their peak, the rodents eat so much vegetation they have to travel across the tundra in great numbers in search of greener pastures. In fact, during these years, they eat so much plant matter that the results are noticeable from space. This seems detrimental to the ecosystem to have the vegetation of the tundra completely destroyed at regular intervals, but research has found that when you exclude lemmings from the system, the vegetation actually suffers over time.

"The main hypotheses about population cycles in lemmings postulate that they result from interaction between predators — foxes, weasels and raptors — and the lemming themselves, or between plants and the lemmings that eat them," says Ims. "Predator-prey cycles have presently most support. The irregularity in the dynamics is likely to be due to disruption from climate variability and change."

Because lemmings depend on cold winters in tundra habitats, climate change is creating major problems for these important arctic residents.

"Warmer and wetter winters cause a problem in terms of ground icing, which means that the animals do not get access to their food plants," says Ims.

In addition, the hardness of the basal layer of snow — which is determined by rain-on-snow events and wind storms in autumn — and ice presents a difficulty when it comes to the ability of the lemmings to dig burrows for shelter over the winter.

Lemmings are known for their surprisingly immodest coats — most rodents do their best to blend into their surroundings, but the Norway lemming (Lemmus lemmus), for instance, has a coat much like that of a calico cat. Not subtle.