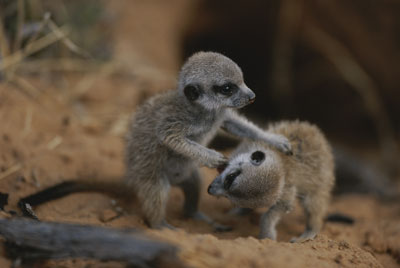 Meerkats may not play dodgeball, but they do play. Why? See more pictures of meerkats.
Mattias Klum/National Geographic/Getty Images

If you've ever played dodgeball, you may be familiar with that singular moment in which a red ball rapidly enters your peripheral vision. As you realize what's about to happen, you're startled by a panicky jolt and a coppery taste in your mouth. The ball smacks your face with a cruel, hollow thud. If you wear glasses, so much the worse; they're likely comically askew now.

If you fail to grab the ball as it vaults off your face, you, my friend, are out [source: National Amateur Dodgeball Association]. These are the rules. You can go take your place, a bit humiliated, on the side lines.

The rules of dodgeball are fairly simple. And, like any other game, the rules are meant to guide play and produce a winner. It's basic game theory. But while we humans can understand and follow rules (and even deduce the highly intellectual rules behind game theory), biologists have yet to crack one vital question: Why do animals play?

Exactly why is it that young members of species exhibit some sort of biological imperative to frolic and run? The failure to explain the reasons animals play isn't for lack of trying. Animals (including humans) have been studied at play for decades. One group of mammals whose play has been the subject of much study is meerkats.

Watching these wily cousins of the mongoose dash about and topple one another is a joy in itself. But intense study has also produced some ideas about why meerkats play. One of the more obvious theories is that playing teaches young meerkats to learn aggression, which will help them fend off attackers or assume a dominant role in their societies. Meerkat groups, called gangs or mobs, frequently have violent clashes with other gangs, called intergroup interaction [source: BBC]. By wrestling with the other youngsters in the gang, meerkats may learn to better keep outsiders at bay. This theory seems logical enough, and it may be true; scientists have yet to definitively prove why meerkats play.

So what are some other theories? One researcher suspected another factor may be at work. Find out how Lynda Sharpe put the social bond theory to the test on the next page.