That Funky Meerkat Scent Comes From a Surprising Source 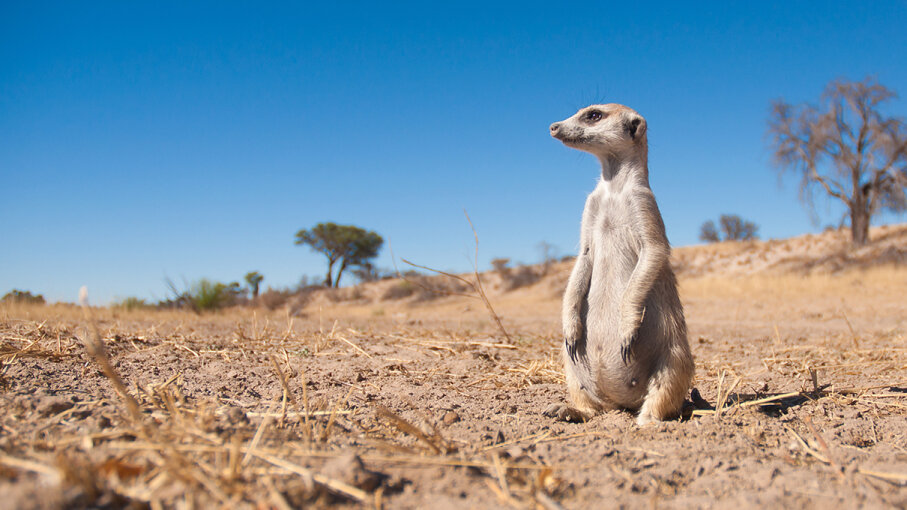 A heavily pregnant meerkat sits in a dry river bed, watching for predators. A new study suggests that meerkats identify group members and potential mates with help from odor-producing bacteria in their hindquarters. Dominic Cram/Getty Images

If you're one of the multitude of fans of the nature show "Meerkat Manor," then you already know the miniature mongoose that roam Southern Africa in clans are adorable creatures that do adorable things. Meerkats pop out of boroughs with their cute little heads extended, darting from one side to the other to see what's going on in the world. They communicate with each other through cuddly, purring noises. OK, so meerkats also fiercely defend their territory and engage in gang-style turf fights. But they do it in the most delightful possible way.

Here's one thing most folks might not know about meerkats: They smell bad. The cute little critters come with a funky scent. And why? It's because meerkats excrete a paste from under their tails that they spread around to mark their territory.

In South Africa's Kalahari Desert, a meerkat wipes his scent on a shrub to mark territory and convey information to other meerkats.
Lydia Greene, Duke University

Now that meerkats have had their turn on the little screen, you might think they'd start grooming themselves a bit more. Before you head out to the Kalahari with some wet wipes and a box of deodorant, you should know that the meerkat musk is an important part of the way the creatures live. With one sniff of a particular odor, a meerkat can tell if they are in a safe space, or enemy territory. They can also tell if another 'kat is a friend, foe or potential mate.

A new study in the journal Scientific Reports shows that the smell is not something that's passed down from generation to generation through genetics — as might be assumed since families of meerkats share scent identifiers — but instead are a product of external bacteria from the environment that latches onto the paste. Duke University researchers swabbed paste samples from nearly 40 wild meerkats, and they found a grab bag of more than 200 chemicals. Meerkats with similar bacteria in their pastes gave off similar smells.

With one whiff, a meerkat can tell if a scent marking belongs to a relative, a rival or a potential mate.
Lydia Greene, Duke University

The researchers believe the critters pick that bacteria up from roaming the same areas. Meerkats then share that bacteria with each other as a part of pack life, when they groom themselves and bump up against one another on a daily basis. Y'know, the stuff they do on "Meerkat Manor." Just stinkier.

Now That's Interesting
Meerkats aren't the only ones whose nose knows; research shows that humans also communicate with each other through scent.