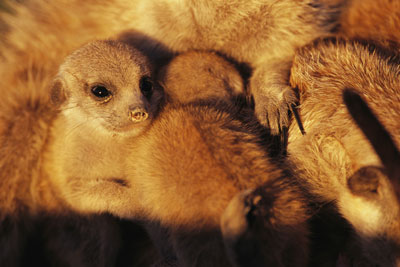 Young meerkats are often very eager to help the grown-ups care for pups. At just a few months of age, meerkats begin helping around the burrow when new litters are born. This includes a lot more than grabbing a baby wipe while the new mother has her hands full with the pups. In fact, the new mother is very often nowhere around the burrow. Usually, she's off foraging just a short while after giving birth. She leaves her pups to be cared for by the subservient meerkats in her gang.

Dominant meerkat females are believed to engage in this behavior to ensure the survival of their genetic line. If they can remain healthy and fat through uninterrupted foraging, there's a greater likelihood that they'll produce equally healthy meerkat pups in abundance for years to come. While the mother is off finding food for herself, her subservient helpers pitch in to raise her offspring.

Much like standing sentinel, serving as a caregiver for newborns has all the trappings of altruism. Caregiving among meerkats is a little more baffling than guarding as lookout, however. It, too, is undertaken within no understandable schedule. And with both sentinel duty and caregiving, studies have shown that some meerkats are more likely than others to pitch in -- in other words, some meerkats are lazier than others when it comes to generous acts [source: Roberts].

Like sentinel duty, caregiving also results in less time to forage for food. But taking care of pups requires much more time. So a subservient female who opts to look over pups that aren't her own stands to lose a lot more weight than she would standing sentinel. And caregiving is also more dangerous. With the rest of the gang out foraging, only a couple of female meerkats may be left behind to care for the pups. This leaves both young and old exposed to attack from predators and members of rival gangs.

Perhaps most puzzling about this altruistic behavior is that a subservient female who baby-sits meerkat pups may already be lactating (producing milk). In this state, she serves as nursemaid, feeding the pups from her own body. Instances of spontaneous lactation among females that haven't recently been pregnant have been observed in meerkat gangs [source: Roberts]. But more often than not, the lactating female has recently been pregnant. In these cases, the female has time to care for another meerkat's pups because her own have been recently killed -- usually by the same dominant female for whose pups the nursemaid is caring.

While the dominant/subservient social structure of meerkat society explains some of this generous behavior, when it comes to serving as nursemaid, there doesn't appear to be any sort of reward -- only risk in return. Perhaps meerkats have proven Immanuel Kant wrong after all. Of course, meerkats aren't investigating altruism with the same zeal that our philosophers are; it's entirely possible that humans are merely projecting our own values onto these tiny critters.

For more information on meerkats, altruism and other related topics, visit the next page.