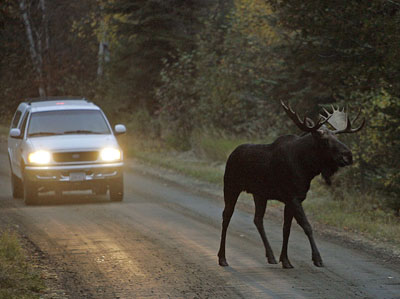 After your alarm goes off for the umpteenth time, you finally drag yourself out of bed, brew some coffee and stumble out the door. You offer up a silent prayer that traffic will be kind to you today, but as you listen to the morning traffic report, you know that fate is not on your side: A tractor trailer has overturned on the main road and there's a 10-car pileup on your alternate route. Determined not to be late, you take a chance on the back roads. But as you slam on your brakes after rounding the second curve, you realize today is just not your day.

Your mind wanders through the possibilities of what's holding up this line of cars -- a school bus, maybe? Or some idiot driving a pathetic 20 mph (32 kph) under the speed limit? Nope, you're in Alaska, and for the third time this month, you're late to work because of a giant deer, looming at a height of 6.6 feet (2 meters) and weighing in at 1,600 pounds (725 kilograms). That's right -- your reputation for punctuality is being tarnished by a moose.

If you lived somewhere like New York City or London, having your commute interrupted by such a hulking beast might actually be exciting. But in Alaska, where there's at least one moose for every four people, seeing this animal wander the streets during winter is expected [source: Rausch and Gasaway, U.S. Census Bureau].

While some people are entertained when moose in Alaska nibble on their shrubbery or join in the morning commute, others are less enthused. Female moose, or cows, are highly protective of their young and if they feel threatened, even if it's unwarranted, they won't hesitate to attack. Similarly, adult males can become very aggressive during mating season and may decide to take that aggression out on an annoying dog and its owner.

In 2007, an overprotective cow attacked a boy innocently playing in his backyard. In a separate incident the same year, a college student was trampled to death by a moose that wandered on the university's campus [source: Clarke]. While such incidents are rare, altercations between moose in Alaska and cars are fairly common. An average of 600 automobile accidents involving these animals occur each year, causing about $9 million in damage. During an especially harsh winter in 2003, the state saw 1,300 collisions that incurred costs of more than $18 million [source: Alaska Moose Foundation].

You don't have to be an expert tracker to find one of these guys. In fact, moose may be the ones that seek you out during the winter.

Why Did the Hungry Moose Cross the Road? 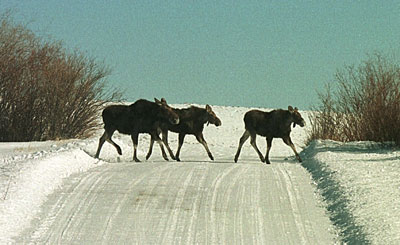 Why did the moose cross the road? To get some breakfast.
Michael Smith/Getty Images

Moose have been visiting Alaskan towns for decades, but it's not because they crave an urban lifestyle or are especially fond of human attention -- they're just hungry. Moose feed mainly on vegetation like tree limbs, sedges and grasses, and when the Alaskan winters come and dump several feet of snow on the ground, their smorgasbord is all but obliterated.

Moose often consume up to 40 pounds (18 kilograms) of wood per day, but when that wood is covered in snow, they can easily end up losing a pound of body weight every 24 hours [source: AP]. Naturally, they head to town, where people, it seems, have cleared the roads for them. To further complicate matters, the Department of Transportation regularly cuts back new tree growth along roadsides, which has the unintended side effect of encouraging ample new growth and eventually attracting hungry moose like a magnet.

Picture thousands of hungry half-ton animals lumbering out of the woods and finding a veritable buffet of greens along the highway. Enter harried drivers fumbling with the radio dial, and you can easily see how the city of Anchorage manages to lose an average of 130 moose each winter [source: AP]. Elsewhere around Alaska, moose are just as unlucky. From July through December of 2006, collisions caused the deaths of 121 moose in the Matanuska-Susitna area and 138 deaths in the Kenai region [source: Hunter]. All told, the entire state loses an average of 600 moose each year [source: Alaska Moose Foundation].

Cars are one of the biggest threats to a moose's safety.
Johner/Johner Images/Getty Images

The repercussions of those deaths are even more significant. Fifty percent of the moose killed by cars each year are cows and 40 percent are calves. Since a cow generally produces around 30 calves in her lifetime and half those calves are cows, it's as though thousands of moose are killed each year [source: Alaska Moose Foundation].

A significant portion of the drivers and passengers involved in moose-related car accidents miraculously survive the event. Unfortunately, the moose (and cars) aren't as lucky. Out of the 61 total accidents catalogued in 2008 (as of April 2008), 43 moose have been killed, while zero human fatalities have occurred [source: Alaska Department of Transportation].

To reduce the number of moose-car collisions on state roads, the Alaska Department of Transportation has installed fencing and lighting along high-incident areas. Although the improvements have reduced collisions in some areas by 80 to 90 percent, certain stretches of road can't be (or simply aren't) fenced off completely. Some roads have made Anchorage's top 10 list for moose-vehicle problematic issues [source: Hunter].

To further improve conditions, the DOT has teamed up with Alaska Moose Foundation to improve habitat and build diversionary trails to make the animals' own territory more inviting so they'll stay off state highways. Until then, if you're driving in Alaska, you might want to ease off the gas and keep your eyes peeled for a set of antlers in your headlights.