by Christopher Hassiotis Aug 16, 2016
New research found that newborn Japanese macaques move their faces similar to other primates, including us. Steve Fleming/Getty Images

You'd be hard-pressed to imagine something cuter than a peaceful baby smiling gently to itself while asleep. But if forced to pick a competitor, a smiling newborn monkey might do the trick. In a new article in the journal Primates, a team of Japanese scientists describe observing smile-like behavior in sleeping newborn Japanese macaques (Macaca fuscata).

Human babies smile in their sleep. A scientific paper published in 1959 described a "slow, gentle, sideward, and upward pull of the mouth" in a small group of human infants, naming the behavior — which also occurred during sleep — "spontaneous neonatal smiles."

A researcher team headed by the Japanese paper's lead author Fumito Kawakami observed similar slight smiles more than 50 baby macaques displayed while napping in between health checkups. This isn't the first delve into primate smiling — a 2015 study published in the journal PLOS One, for instance, described chimpanzees laughing and smiling in a way extremely similar to humans — but it does help increase our understanding. Chimpanzees are more closely related to humans than are macaques, so this new finding suggests smiling behavior goes further back in primate history.

"About a decade ago we found that chimp infants also display spontaneous smiles," says study co-author Masaki Tomonaga in a press release. "Since we see the same behavior in more distant relatives, we can infer that the origin of smiles goes back at least 30 million years, when old world monkeys and our direct ancestors diverged."

Want to see the smiles in action? Check out this video from the University of Kyoto study:

If you watched this video above, you may be thinking that the smiles don't look quite as happy as you might've expected.

"Spontaneous macaque smiles are more like short, lop-sided spasms compared to those of human infants," says Kawakami. "There were two significant similarities; they both happened between irregular REM sleep, and they show more lop-sided smiles compared to symmetrical, full smiles. A major difference, though, is that the smiles were much shorter."

One theory behind these smiles-while-asleep is that they help increase parental feelings in the adults responsible for the newborns. But the authors of this study also note that the smiles look similar to grimaces of pain, and they speculate the subconscious movement may be a way for the body to train itself to smile, laugh and grimace as well.

Now That's Cool
Recent research has shown that in addition to some primates, dogs and rats also emit sounds in response to pleasure, though scientists are hesitant to define the noises as laughter.

Large Hadron Having a Smashing Good Time in 2016

Bronze Age Wonders Emerge After 3,000 Years Beneath a British Bog 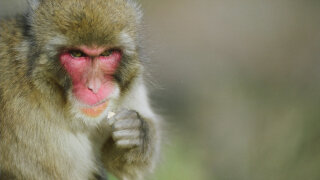 Should We Worry About Apes Learning to Use Handguns?