Browse the article Nutria: River Rats Only a Mother Could Love 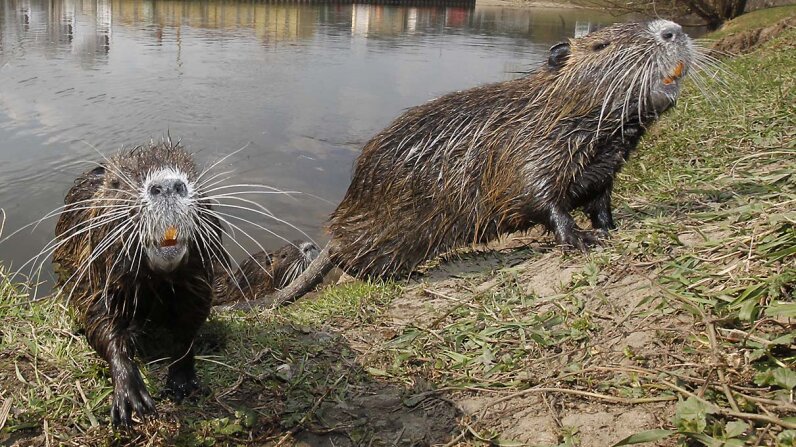 Nutria (Myocastor coypus) aren't really rats, but this South American wetland-dwelling rodent certainly looks like a rat with its long reddish teeth, twitchy whiskers and slinky tail, although it's actually more closely related to a porcupine or a capybara. Some of them can grow up to 2.5 feet (0.8 meters) long — not counting the foot-long (0.3 meter) tail — and weigh in at a husky 20 pounds (9 kilograms). And what do they do with all that raw rodent power? Well, in some places they destroy wetlands and crops, cause soil erosion with their burrows, damage human-engineered flood control systems and spread disease.

Nutria, or coypu, as they're called in South America, were brought to the United States in the late 19th century to be grown for their fur. At some point in the 1930s they escaped or were released — the details are a bit fuzzy — into the Louisiana bayou, and they went hog wild. The thing about these jumbo-sized rodents is they are absolutely relentless breeders: They reach sexual maturity at about five months after birth, and females go on to have several litters a year. One female nutria can have as many as 200 babies in her lifetime. You can do the math.

And although nutria are herbivores, these "swamp rats" are not dainty eaters: they eat a quarter of their body weight in plant matter every day. And they're not picky about which part of the plant they dine on — the leaves, stems, roots all tempt them equally — so when they get to work on an area of marsh or wetland, they completely denude it of all vegetation. The Louisiana Department of Wildlife and Fisheries currently allows anybody with a hunting license to kill up to five of the animals a day because nutria also have a history of damaging agricultural crops like rice and sugarcane in the state.

Which is why California is so freaked out about the nutria recently sighted in three of its counties. Although nutria are established in 16 U.S. states, California succeeded in eradicating them in 1965. Since agriculture is a big industry in California, the 20 new nutria sightings reported over the past year have the state fretting over what to do when those numbers start growing.

Now That's Interesting
In 2001, the Louisiana Department of Wildlife and Fisheries asked chefs from all over the state to develop recipes using nutria meat. It's said to taste like rabbit or squirrel.