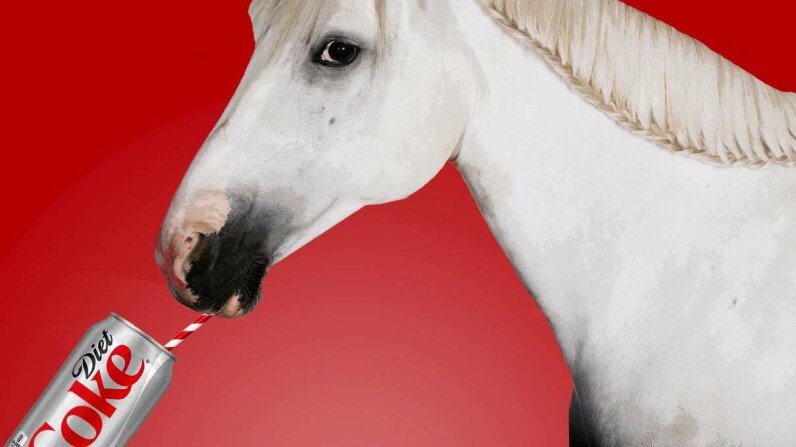 Humans and equines alike can get bezoars, or big masses that can impede digestion. Blasting some types of bezoars with cola can effectively dissolve these obstacles. Amann/Kan Hoglund/Getty

Racehorses, unlike race cars, do not usually find themselves plastered with sponsorships from large corporations. No purebred horse ever had, say, a huge GoDaddy.com banner flung over its shanks while it galloped through the Kentucky Derby. But if that's the way racing is heading, a humble suggestion to all the horses out there: Talk to the Coca-Cola Company.

Not just because there's big money there. (Although there is: Ask any Olympic partner.) But because as with any good sports sponsorship, the athlete should use the product, and swear that they couldn't live without it. And it turns out that for some horses, Diet Coke can be a literal lifesaver.

Now many of us would agree: Without a 4 o'clock Diet Coke fix, we're done for. But the carbonated can isn't just an equine pick-me-up; it's actually a treatment for a serious problem. Horses (and humans) can get life-threatening impactions from eating certain foods. The impactions can cause ulcerations or tearing in the intestines or stomach, leading to a lot of pain for the horse and death. Persimmons are one cause of these bezoars (or masses) that block digestion, due to the fiber and seeds that don't pass well through the horse's body.

But a 2002 study showed that in humans (five to be exact), Coca-Cola could blast the impaction if given through a nasogastric tube. (And we're talking a lot of Coke: 3 liters over 12 hours.) Researchers posited that the carbonic and phosphoric acid in the cola causes carbon dioxide bubbles to form in the stomach, which help to disintegrate the bezoars. There's even a systematic review charting the results of this peculiar treatment, which was successful 91.3 percent of the time in humans, either on its own or combined with another therapy.

And while prudence doesn't allow us to recommend injecting other animals with beverages normally, the results were intriguing enough to interest equine researchers. In 2007, a paper detailed the first successful treatment of a persimmon bezoar in a horse using Diet Coke, by siphoning the soda through a nasogastric tube. Not a bad endorsement.