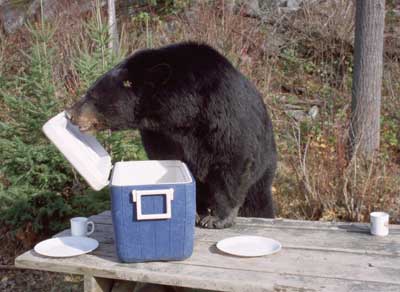 Mammal Image Gallery It may have been alright for Yogi, but this bear may have its lifespan cut in half by its panhandling tendencies. See more pictures of mammals.
Altrendo Nature/Getty Images

People love their convenience foods. From microwaveable TV dinners that cook up in minutes to prepackaged peanut butter and jelly sandwiches with the crusts already cut off -- if it comes in an easy-to-open package, we're all over it. As it turns out, humans are not alone in their affinity for these accessible edibles. Bears, too, are fond of our readily available goodies. So much, in fact, that it's killing some of them.

Bears are naturally omnivorous and stick with foods like nuts, berries and other plants for up to 85 percent of their dietary needs [source: NPS]. They're also opportunists -- if they can find food without having to dig through dirt or climb trees, they're all for it. Bears have an incredibly keen sense of smell, they can smell an apple from more than half a mile (1 kilometer) away [source: Appalachian Bear Rescue]. So when they detect a waft of your tasty lunch, they'll head your way and politely beg for a bite.

Although instances of panhandling by black bears have increased as people encroach further into bear country, the behavior has existed in one form or another since at least the 1880s. In 1888, park rangers in Yellowstone National Park reported black bears gathering around garbage piles near hotels and visiting park dumps in their quest for food. By 1891, the behavior had become so disruptive that bears were removed from the park occasionally. In 1910, people reported the first cases of official black bear panhandling when the animals were seen begging for handouts along park roads [source: Kaeding].

Despite the fact that a black bear eating cookies out of your hand would make for a great photo op, the reality is that feeding bears is dangerous. Don't for a second think that if you treat a black bear to a slice of pie, he'll repay you with kindness. In fact, he might just repay you with a trip to the emergency room. The majority of bear attacks are a direct result of the animal trying to get food. Feeding a bear also creates problems for the animal itself -- panhandling bears have half the life expectancy as bears that fend for themselves [source: NPS]. 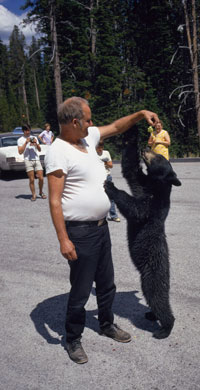