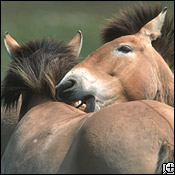 This horse is named for the nineteenth-century Russian explorer who first identified the species.

It is thought to be the only purebred wild horse still in existence.

Originally found over a vast area of desert and steppe in Mongolia and adjacent countries, it may now be extinct in the wild. The last confirmed sighting was in 1968.

There are plans to reintroduce zoobred animals into its former range.

It probably lived in herds of fifteen to twenty mares and young led by one stallion, with separate bachelor herds of up to one hundred.

The young are weaned at two years and they live for thirty or so years.