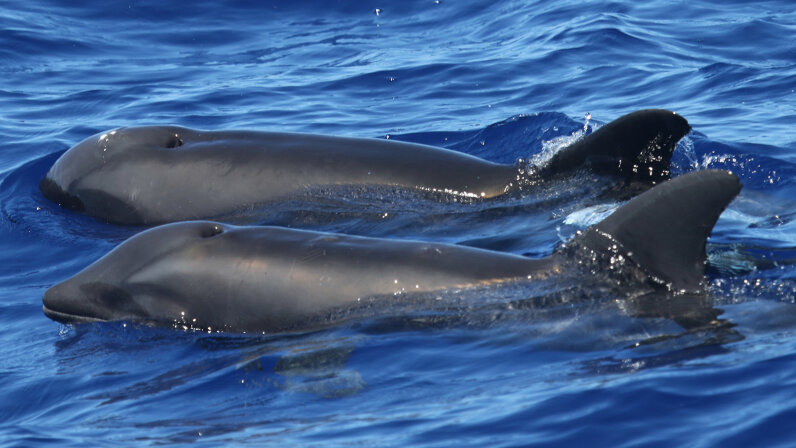 The hybrid mammal (seen in the foreground), which is a cross between a rough-toothed dolphin and a melon-headed whale (see in the background), was spotted by researchers off the coast of Kauai, Hawaii, in 2017. Kimberly A. Wood/Cascadia Research

Prepare yourself, lovers of animals and science, because everything about this story is cool. Researchers from the Cascadia Research Collective were out doing some acoustic monitoring near the Pacific Missile Range Facility near Kauai, Hawaii, in August 2017. They were checking to see what kinds of marine mammals were in the neighborhood before a naval training exercise, and did they ever find some.

Sure, they found bottlenose dolphins (Tursiops truncatus) and rough-toothed dolphins (Steno bredanensis), as they expected, and even a couple of spinner dolphins (Stenella longirostris), which sounds like a fun species. There were a few pantropical spotted dolphins (Stenella attenuata), which are rare in this part of the Pacific Ocean. They also found some melon-headed whales (Delphinidae), which is merely descriptive of how they look, not an insult to their intelligence. Also, they're a kind of dolphin. Melon-headed whales could use some rebranding.

This is all pretty cool already. But then the researchers found what looked to be a hybrid between a rough-toothed dolphin and a melon-headed whale. How to be sure it was a hybrid, though, and not merely a weird-looking melon-headed whale? They took a genetic sample, that's how.

But convincing a marine mammal to come in close so researchers could actually get that sample is tough. The "I was a good odontocete" stickers don't exactly adhere well to their skin. So you have to take the sampling to the mammals — with a crossbow, of course.

Don't worry! This story was not written by Herman Melville. The crossbow in question shot a special dart that didn't penetrate deeply into the animal. The dart was then brought back to the researchers with a tissue sample on it, and the whale-dolphin hybrid — we're calling it "Dale," because, well, why not? — swam free. The sample confirmed that yes indeed, this was a hybrid — the first-known between these two species. Their findings were all published in a study in late July.

"Dale" is not a new species, however. Often interspecies hybrids are infertile, like mules. That means they can't reproduce. "While hybridization can at times lead to new species — see for example the Clymene dolphin — most of the time this does not happen, and with only a single hybrid documented in this species pair, it definitely does not appear to be the case here," lead researcher Robin Baird says via email. So the researchers are calling Dale Steno bredanensis for now, but it's a just placeholder.

Baird and her team intend to go back to Hawaii in August 2018, one year after discovering "Dale," for more field projects and hope to find him again. "If we were lucky enough to find the pair again, we would try to get a biopsy sample of the accompanying melon-headed whale, to see whether it might be the mother of the hybrid, as well as get underwater images of the hybrid to better assess morphological differences from the parent species," Baird says.

The researchers also noticed while they were out on the water in 2017 that there was a melon-headed whale hanging out with a pod of rough-toothed dolphins. This could be "Dale's" mom, who is proving that sometimes you have to create your own family to live your best life.

NOW THAT'S COOL
Hybrids like "Dale" happen in the wild all the time. A bottlenose dolphin and a false killer whale (also a dolphin) make a wholphin. A beluga whale and a narwhal, unicorn of the sea, make a narluga. And on land, coyotes have been known to mate with dogs to create coydogs.