Browse the article How do reindeer find enough food in the tundra? 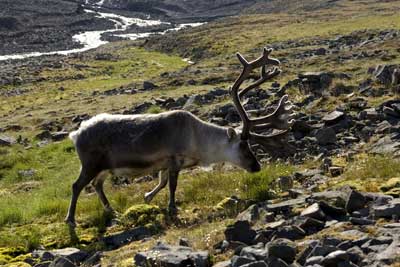 Reindeer reside in the tundra, which is the plain between the polar ice cap and the timberline. See more arctic animal pictures.
Ralph Lee Hopkins/Getty Images

It's surprising that the thousands of wild reindeer roaming the barren tundra of North America, Europe and Asia have never united to overthrow Santa's famous ei­ght. While Comet and crew live it up at the North Pole, dining on homemade candy canes and fruitcake, their nonmagical brethren must tough it out in some of the coldest latitudes on the globe.

Reindeer ­graze throughout the year in the permanently frozen grounds of the tundra. Tundra is the relatively flat land between the polar ice cap and the timberline, where the temperatures are too cold for trees to grow. Because of the tundra's constant frosty conditions, only shrubs, grasses and lichens survive there. Lichen, also referred to as reindeer moss, is similar to moss in appearance and is a combination of algae and fungus.

Members of the deer family, reindeer have thicker fur to accommodate for the climate; their signature antlers also come in handy in this frigid environment, which we'll discuss later. They enjoy one another's company and move together in grazing herds. Caribou are the same species -- Rangifer tarandus -- as reindeer, but go under a different moniker in their North American habitats of Alaska and Canada. Named after the French word for "large deer," caribou live in the wild and haven't been domesticated like some reindeer.

Reindeer domestication dates back 5,000 years [source: Finstad]. Certain Eskimo groups such as the Nenets, a native tribe in Siberian Russia, Mongolians, and other people who live within the reindeer's territory still practice the long-held tradition of reindeer herding. In these cultures, reindeer not only serve as a source of food, but also as pack animals that are used for hauling and transportation. These people use reindeer pelts as insulation material for clothing and shoes and separate the fibers of the animals' tendons to use as sturdy thread [source: Montaigne].

But how do reindeer and caribou find food and survive in such desolate landscapes? And how do they make it through the harsh winters? We'll cook up the answers about reindeer diet on the next page. 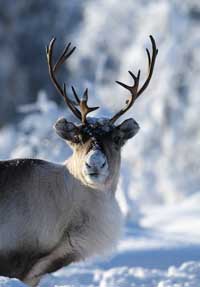 In the winter, reindeer dig lichen out from under the snow for food.
Peter Lilja/Getty Images

Reindeer weight fluctuates throughout the year in accordance with the seasons. Once spring comes along in the tundra (around April) and plant life returns, herbivorous reindeer can graze to their hearts' content. As vegetarians, reindeer and caribou get their fill from the grasses and shrubs that grow in the tundra. Males reach their peak weight of around 220 pounds (100 kilograms) in August [source: University of Alaska Fairbanks]. At this point, they go "in rut," which means they begin mating. Mating season is also the cutoff point for females to chow down, since they'll have to endure a winter pregnancy with scarcer rations.

Once winter sets in and snow covers the tundra, the reindeer diet narrows down to one food: lichen. Lichen survives the cold winters because of its unique biological combination of algae and fungus. Thanks to the algae, lichen doesn't require much sunlight to produce chlorophyll; the spongy material of the fungus also holds up well against the harsh temperatures.

Reindeer sniff out lichen beneath the snow and use their curved hooves or antlers to uncover it. During this time, reindeer maintain more sedentary habits to preserve their energy [source: University of Alaska Fairbanks]. The lichen-only regimen is the reverse of the Atkins Diet. The plant contains high amounts of carbohydrates, but no protein. Consequently, the carbs provide the reindeer a source of quick-burning energy that carries them through winter. However, lichen isn't a particularly hearty food, and for that reason, reindeer will eat 4 to 11 pounds (1.8 to 4.9 kilograms) of reindeer moss each day [source: Dieterich and Morton]. That's why reindeer pack on the pounds in the warmer months when there's more to choose from. In fact, these animals gradually lose weight starting in the fall and continuing to March [source: University of Alaska Fairbanks].

Recently, the changing climate has threatened the reindeer and caribou populations. Hotter temperatures have led to more rain and snow melt in the tundra regions. That, in turn, results in sheets of ice forming on top of the snow, once the water refreezes. Reindeer and caribou cannot safely break through the ice with their hooves, leading some to starve to death [source: Mcfarling].

With their seasonally influenced diet, the survival of reindeer depends on the balance of nature. If climate change tips that balance too far, reindeer and caribou could become zoological relics of the past.

For more information about reindeer and caribou, visit the links on the next page.