Browse the article What Do Reindeer Do When They're Not Pulling Santa's Sleigh? 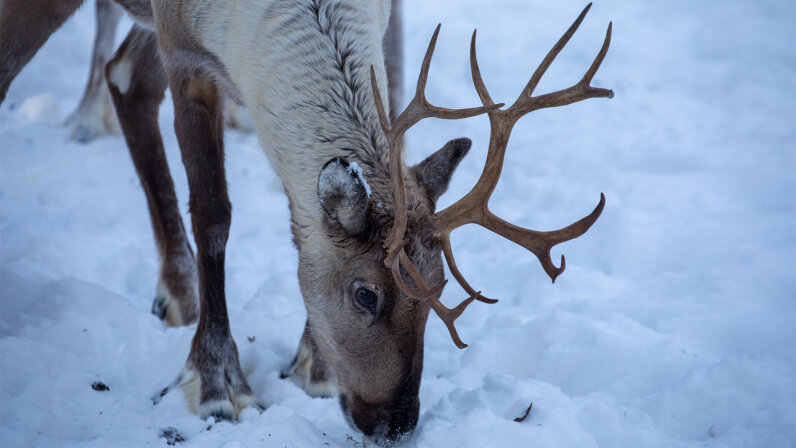 A reindeer (Rangifer tarandus) pokes in the snow for food at the Ähtäri Zoo in Ähtäri, Finland. Ninara/Flickr (CC By 2.0)

Oh, reindeer. Televised holiday specials just wouldn't be the same without you. And neither would Santa's preferred toy delivery method. From pulling our favorite good-cheer guy around the world to starring in timeless stop-motion stories, reindeer are at the top of our holiday list. How well do we know these antlered creatures, though? Read on for some surprisingly cool facts about Santa's reindeer.

A Reindeer By Any Other Name

What sets reindeer apart from their caribou kin? Both reindeer and caribou share the same genus and species name, Rangifer tarandus, but are actually different subspecies. Despite sharing a branch on the family tree, reindeer and caribou have had markedly different upbringings. People began domesticating reindeer about 3,000 years ago in Eastern Russia and Scandinavian countries, and this has resulted in reindeer that are shorter and heavier than their wild caribou cousins. Reindeer also have been bred to sport thicker, denser hair. However, reindeer are known for their starring role at the North Pole, where once a year they pull Santa's sleigh around the world to deliver presents.

In the Arctic wild, reindeer live in a liminal space — the tundra plain between the timberline and the polar ice cap. They eat lichens, as well as the leaves of willow and birch trees, and grasses. However, Santa's domesticated reindeer prefer a specialized diet — and, no, it isn't hot cocoa and sugar cookies. "Reindeer are very picky eaters," says Tracy Snowman (yes, that's her real name), who along with her husband, Scott, owns Snowman's Reindeer in Canton, Illinois. The Snowmans are former educators who welcome visitors to their reindeer farm year-round. "There is no lichen available down in the lower 48 United States, so we use a grain mix developed by the Reindeer Research Project based out of the University of Alaska. It is a carefully balanced protein/fat mix that is ideal for their needs. We also feed premium alfalfa hay, but in small amounts, as the hay can cause bloating." With this specially balanced diet, Santa's reindeer stay fit enough to fly 'round the world — at least once a year.

Reindeer have adapted to their often snowy environments by developing the ability to see ultraviolet light. This trait is unusual for mammals, but there are birds, bees and a few fish species whose eyesight can distinguish ultraviolet light, which refers to light wavelengths outside the violet-to-red spectrum visible to humans. Reindeer use their special eyesight to spot lichen — a major food source in the Arctic — and the urine of predators or mates, all of which absorb UV light. When an object absorbs UV light, it appears dark in contrast with snow, which reflects UV light. There's no word, however, on whether this ability helps reindeer read Santa's naughty or nice list.

Reindeer Really Do Have Red Noses

Most of the reindeers' iconic features in the 1939 children's book, "Rudolph the Red-Nosed Reindeer" are fictional, with one important exception: Some reindeer really do have red noses. And for good reason, according to a December 2012 study in the journal The BMJ. Their red-hued sniffers are caused by densely packed blood vessels that help regulate their body temperatures in harsh conditions. According to the study, Rudolph's legendary luminous red nose "helps to protect it from freezing during sleigh rides and to regulate the temperature of the reindeer's brain, factors essential for flying reindeer pulling Santa Claus's sleigh under extreme temperatures."

The breeds' ubiquitous nose also comes in handy in a pinch. "Our reindeer are second-string reindeer for Santa. When one of the main reindeer gets tired, he drops them at our barn and picks up one of ours," says Snowman. "We don't know who might get to fly, so everyone is on standby Christmas Eve. If Santa uses one of our reindeer, he leaves a note in the barn and a beautiful brass bell from his sleigh that the reindeer can wear to show he or she rode with Santa."

Reindeer eyes change color from gold to blue, and back again. It's all part of the set of highly specialized adaptations reindeer have developed to live in harsh climates. During Arctic summers, when daylight is continuous, reindeers' eyes turn golden because most of the light is reflected back from their retinas. In the winter, however, when night is abundant, tissue behind the retina actually becomes less reflective. This causes their eyes to take on a blue hue. The color-shifting ability is all part of their charm, says Snowman, as is their temperament. "My biggest shock in living with them is how sweet they are," she says. "They will come right to you, give you kisses, let you pet them and hand-feed them. They are truly magnificent, magical creatures that capture the hearts of people instantly. I can't really put into words how much we love them."

Santa's Reindeer Are Most Likely Female

Sure, Santa's reindeer are known for Rudolph's red nose and the ability to fly, but there is another real-life characteristic that may have us rethinking their image. Turns out, most male reindeer shed their antlers in early December at the end of mating season, while female reindeer keep their antlers throughout the winter. "Most males lose antlers before Christmas," agrees Snowman, "but females keep them until spring. There is a very good chance all of Santa's reindeer are female!"

Female reindeer have another advantage, too. While male reindeer thin down during mating season, female reindeer go into winter with 50 percent body fat to keep them nice and toasty during low temperatures — like all that wind chill while they're up there pulling a sleigh.

Now That's Interesting
Some mushroom specialists (mycologists) believe the story of Santa and his flying reindeer comes from ancient shamanic ritual: Reindeer would eat hallucinogenic mushrooms and then the Sámi shamans would drink the filtered reindeer urine. The resulting mushroom high made them believe the animals were flying. And the rest is holiday history.