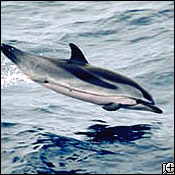 Identified by the lateral stripes that originate at their eyes, the striped dolphins are sometimes seen swimming alongside large ships off California and in the Atlantic, a behavior known as bow-riding.

In the eastern tropical Pacific, where they are also found, they tend to be shyer.

These dolphins are energetic swimmers, sometimes moving upside down and jumping as high as twenty feet (6 m) out of the water to do backward somersaults.

Social animals, they are commonly found in schools of up to five hundred individuals.

The size of the school depends on geographic location; those from the western Pacific, where they are more abundant, tend to be much larger than the groups in the eastern Atlantic Ocean.

Schools may be classified according to age and breeding status.

Range: All major oceans of world

What Can I Do?: Visit The Whale and Dolphin Conservation Society and The Ocean Conservancy for information on how you can help.

What happens to whales when they die?
Frozen Sperm Is Saving These Ferrets
Madagascar's Most Famous Species Is Near Extinction