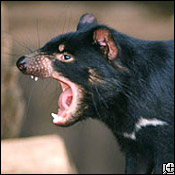 The Tasmanian devil went through a serious decline due to a widespread infectious disease, but its numbers are now recovering — enough for it to be considered a pest by farmers because it preys on sheep and chickens.

Many researchers consider this mammal to be the marsupial equivalent of the hyena because of its body shape, short wide snout, and extremely strong jaws, which are capable of crushing bones.

Like the hyena, the Tasmanian devil is often described as intelligent and strong. In addition, it runs like a hyena and often feeds on carrion — usually small mammals and fish.

It also feeds on live invertebrates, such as beetle larvae.

A solitary nocturnal species, it spends the day resting in burrows or grassy nests, which it makes in hollow logs or thick brush.

At night it carefully sniffs out prey and waits patiently in ambush.

Life Cycle: Mating March to May; gestation about 31 days, one to four young born 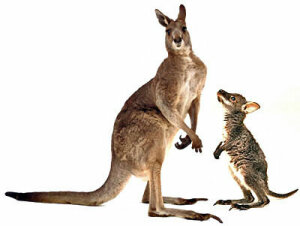 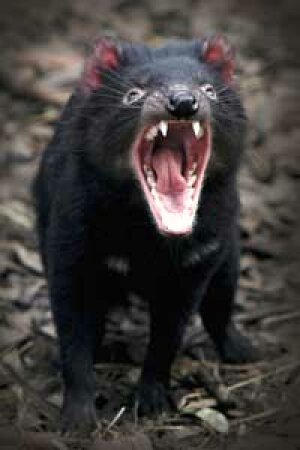 Are Tasmanian devils fighting their way to extinction?