How do walruses sleep in the water without drowning?

Browse the article How do walruses sleep in the water without drowning? 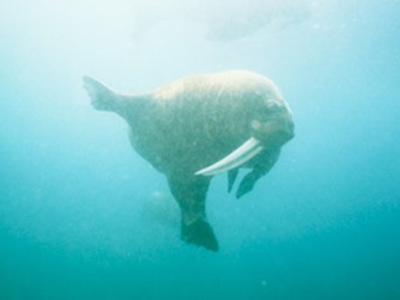 Lifeguards rescue hundreds of people from drowning each year, and despite harrowing scenes from "Baywatch" indicating otherwise, most of those rescues are probably due to something mundane like swimmer fatigue.

If people swam a bit more like walruses, lifeguards might be out of a job. Although clumsy on land, these aquatic mammals become pictures of grace underwater. Their four flippers propel them to speeds of up to 22 mph (35 kph), and their well-tuned circulatory systems enable them to spend more than 10 minutes underwater before coming up for air. Their hardy bodies -- male Pacific walruses may weigh as much as 3,748 pounds (1,700 kilograms) -- can even tolerate frigid arctic waters as low as -31 degrees Fahrenheit (-35 degrees Celsius) [source: SeaWorld].

­Even though you may not envy the thick layer of blubber that keeps walruses warm, you might find their ability to sleep in the water without drowning incredibly helpful. Wouldn't it be nice simply to stop swimming and gently bob along in the water whenever you got tired instead of having to haul yourself back to dry land?

The fact that walruses can doze off without sinking to their deaths isn't that surprising when you consider all the other things they do while at sea: They mate in the water, give birth in the water and nurse their young in the water. They spend so much time at sea -- two-thirds of their lives, in fact -- that it makes you wonder what they don't do there.

Well, you can rule out sleeping as a possible answer. Find out how walruses sleep in the water without drowning on the next page. 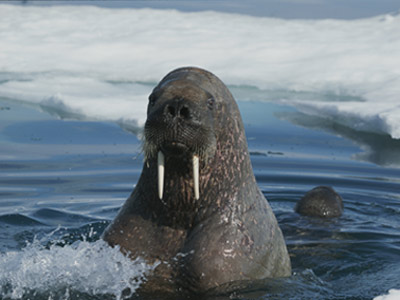 Pharyngeal pockets enable walruses to bob up and down at the surface with ease.
Norbert Rosing/National Geographic/Getty Images

If you've read How Walruses Work elsewhere on this site, then you're already familiar with the way male walruses use the pharyngeal muscles near their throats as flotation devices while they serenade potential mates. Along with propping up the males in the water, the air sacs help them produce their characteristic bell-like sounds, which the ladies apparently find irresistible.

The pharyngeal pouches, located on either side of the walrus's esophagus, are essentially expandable elastic pockets that can hold up to 13 gallons (50 liters) of air [source: MarineBio]. When filled, these pouches enable walruses to bob up and down in a vertical position, keeping their heads above water.

Females also use this position when they nurse their young. The calves nurse upside down as the female bobs along effortlessly, like a buoy. Along with aiding the females with nursing and the males with serenading, the muscles also prevent water from entering the animals' mouths when they dive underwater. Of course, at this point, the pouches aren't inflated -- that would make the average 262-foot (80-meter) dive out of the question [source: SeaWorld].

Floating along aimlessly in the ocean isn't ideal, even for walruses, so the animals generally hook their tusks over stable ice floes to keep from drifting off. Since walruses have few natural predators, they don't really have to worry about being eaten while they slumber either. If another animal decided to make a meal of a napping walrus, the water would actually be the toothy beast's best chance of escape.

For more on walruses and related topics, try some of the links floating around on the next page.