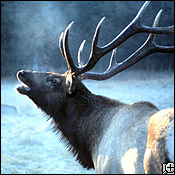 Called the red deer in Europe and the elk in North America, the wapiti is a gregarious species that typically lives in herds of two hundred or more.

Europe has the smallest subspecies, North America the largest.

The branched antlers of some North American males are almost six feet (2 m) across.

The males use their antlers in autumn fights to defend territory and get access to females.