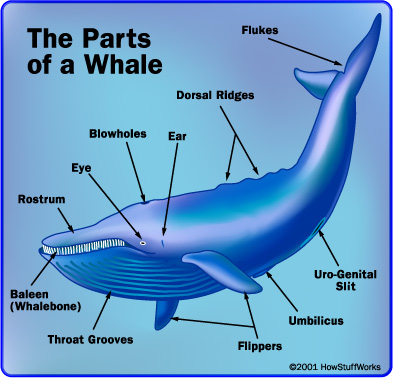 To us, the path of these creatures from land to sea may seem like an odd turn of events. Why would a land mammal, specifically adapted for life on solid ground, evolve into a sea creature, spending much of its time away from air and sunlight? The best guess is that the whale's ancestors simply went where the food was. The ocean is filled with a wide variety of fish and crustaceans, while food along the coast can be scarce. Most likely, whale ancestors first ventured into the water to take advantage of this bounty.

To make this transition, whales had to overcome a number of obstacles. First of all, they had to contend with reduced access to breathable air. This led to a number of remarkable adaptations. The whale's "nose" moved from the face to the top of the head. This blowhole makes it easy for whales to breathe in air without fully surfacing. Instead, a whale swims near the surface, arches its body so its back briefly emerges and then flexes its tail, propelling it quickly to lower depths.

To breathe in air at the surface, a whale flexes a muscle that opens the blowhole and then inhales in the same way as any other mammal. When the whale relaxes the muscle, the blowhole closes, so it is safe to submerge again. Since they can only breathe at the surface, whales have had to develop conscious breathing. They do not have the automatic breathing processes that we do. Contrary to popular belief, whales do not squirt seawater out of their blowholes. The spout people see is actually caused by exhaled air. Since the exhaled air is typically warmer than the surrounding air at the water's surface, it cools rapidly as it flows out. The water vapor in the air immediately condenses into a liquid, giving the appearance of spraying water. Since each species of whale has a uniquely shaped blowhole (and many have two blowholes), they also have their own distinctive spout shape. Experienced whale-watchers can identify a particular species by its spout alone.

Whales aren't the only mammals that live in the water. Otters spend lots of time in rivers and oceans, and their bodies are adapted for moving smoothly through water. Dolphins are aquatic mammals, too. You can learn more in this mammal guide and from .