Browse the article Why do wildebeests spend their whole lives migrating in a circle? 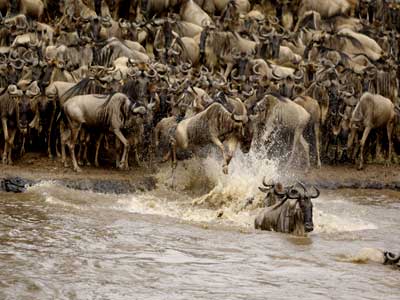 In 2007, part of Kenya's Mara River became a mass grave for a thundering herd of wildebeest. Around 10,000 of the animals, which are also called gnu, died while attempting to cross at a bend in the river. When the first in the group reached the water, the current was too swift to ford, and hundreds behind followed in suit, not realizing the danger. That single event wiped out an estimated 1 percent of the wildebeest population in Africa [source: National Geographic News]. Although the number of casualties in that incident was particularly high, drowning at river crossings is one of the more dismal common occurrences of wildebeest life in the Serengeti.

That herd of wildebeest was traveling along its annual migration path. Like the monarch butterfly's epic 3,000-mile (4,828-kilometer) trip to Mexico every year, the wildebeest's migration is one of the most fascinating and large-scale in the world. At least one million wildebeest complete a semi-circular path from the Serengeti in Tanzania to grazing areas to the north in Kenya. The precise route and starting time change every year, but the wildebeests cross around 1,000 miles (1,609 kilometers) of land, with hundreds of thousands of zebra and Thomson's gazelles alongside them.

Wildebeests look like a cross between a moose and a bull. Growing up to 4.5 feet (1.37 meters) tall, the animals have skinny legs, a lean body and a large head with two curved horns. At first glance, you'd probably guess that they're part of the bovine family, but wildebeests are actually a relative of the antelope. Their common name comes from the phrase "wild beast" in the Afrikaans language. Despite their bulky bodies, wildebeests don't rank at the top of the food chain in their plains and savanna habitats in Africa.

Grass-grazing wildebeests -- and their calves in particular -- are targets of carnivorous cheetahs, lions and hyenas. In the first months of the year in the Serengeti when hundreds of thousands of female wildebeests give birth, the predators may pick off the newborns. That mass birthing period marks the beginning of the seemingly everlasting wildebeest migration. 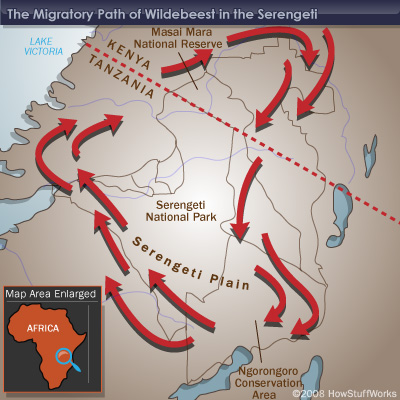