Wolves' Return to Yellowstone a Boon for Streams

Browse the article Wolves' Return to Yellowstone a Boon for Streams 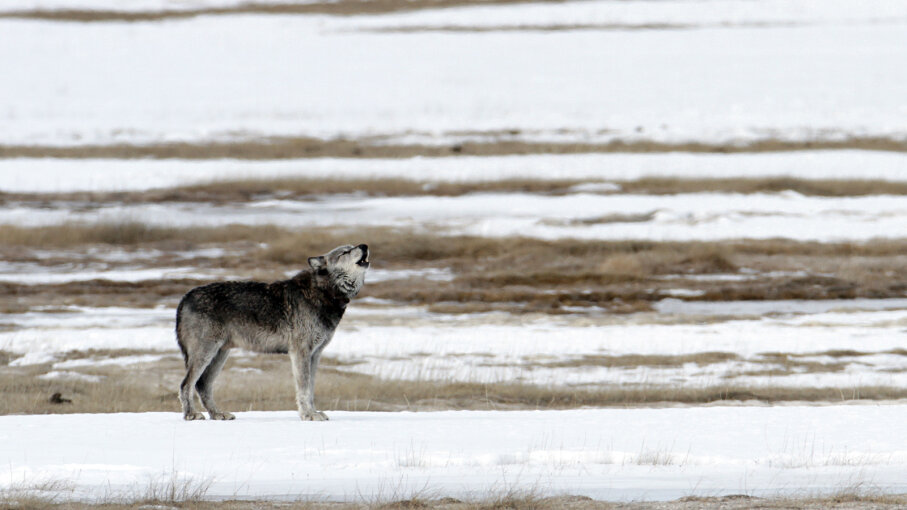 The presence of wolves at Yellowstone National Park, like this alpha male of the Canyon pack in the Lower Geyser Basin, is helping reinvigorate the park's streams and waterways. Jim Peaco/NPS

Wolves almost always get a bad rap (see: "Little Red Riding Hood," "The Three Little Pigs," and way too many other fables and fairy tales to name). But the notorious wild canines are finally getting their time to shine, thanks to a team of researchers at Oregon State University who are singing the wolf's praises in a first-of-its-kind study published Nov. 8, 2018, in the journal Ecohydrology.

According to Robert Beschta and William Ripple of the OSU College of Forestry, their study to examine the reintroduction of wolves to Yellowstone National Park indicates the predators' presence has had a positive impact on stream structure and function. Funded in part by the National Science Foundation, the study looked at stream-bank willows along two forks of a Yellowstone creek over a 13-year period. The study kicked off in 2004 — two decades after cougars had returned to the park, and nine years after wolves made a comeback.

Here's why researchers say the wild return matters: By the early 1900s, hunters were responsible for the extirpation of gray wolves and cougars at Yellowstone (which means they were extinct in that specific area, but still existed elsewhere). The lack of predatory animals allowed for an overabundance of elk to enter the park. Those willow-eating animals depleted local plant life that had protected the area, which led to the erosion of stream banks and damaged waterways.

"In the 1990s, elk were still keeping the willows short, usually less than 2 feet [.6 meters] tall, and that led to stream widening — oversized cross sections of channel and a drastically reduced frequency of overbank flows," Beschta said in a statement. "But by 2017, willow heights greater than 6 feet [1.8 meters] were prevalent and canopy cover over the stream, which had essentially been absent in 1995, had increased to 43 percent and 93 percent along the west fork and east fork, respectively."

Scientists believe the healing process will take time, but the significant improvements noted during the timeframe of this study indicate more positive change could be ahead. And while the cougars' role in all this shouldn't be ignored, it's the wolves that seem to have moved the needle on major restoration.

"The cougars had been back for a while, and the bears have always been there, but they were unable to control the elk populations or at least their browsing," Beschta said. "It wasn't until wolves were returned that we got this reshuffle in what elk were doing and we began to see improvement in plant communities and streams. This is the first study showing improving stream morphology in Yellowstone's northern elk range, or anywhere else in the U.S. as it relates to the return of a large predator."

And thanks to the work of the wolves, other species are now able to make their own contributions, like the beavers that are returning to the now vegetation-rich area and building dams. Considered by many a nuisance, beavers actually help reinforce and reconnect streams with floodplains in ways only beavers can, by irrigating riverbanks that wouldn't happen without them. "That's not only good news for riparian vegetation but also a host of wildlife species, such as songbirds, waterfowl, amphibians, fish and others," Beschta said.

So hey, thanks wolves. Your public profile could still use a lot of work, but you're ecosystem stars in our eyes.

Now That's Interesting
Wolves don't really understand the meaning of moderation. When they get a successful kill, they're capable of consuming about 9 kilograms (ahem, that's almost 20 pounds) in one sitting. Apparently the highest-ranking wolf gets to eat first, and whatever he and his buddies can't finish is up for grabs to the scavengers. But wolves are also known to wait as much as three days between meals, so ... you'd probably load up too, right?