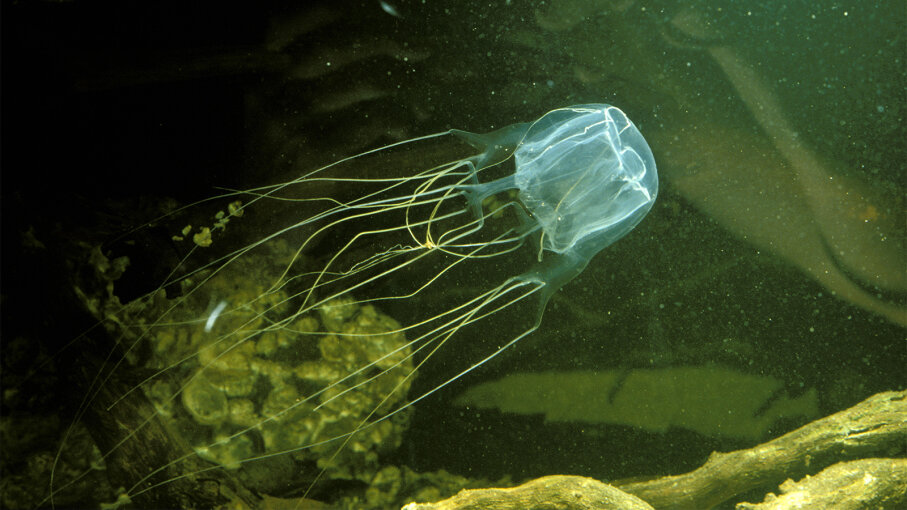 The box jellyfish (Chironex fleckeri), also known as a sea wasp or marine stinger, releases a toxin so powerful that it causes a rapid spike in blood pressure, which can make the heart seize up and lead to death. Auscape/Universal Images Group/Getty Images

Let's face it, jellyfish are more bothersome than threatening, which is why no one would tune into "Jellyfish Week." Sure, their stings hurt and itch, but sharks can tear a limb off. If that doesn't get you your own show, nothing will.

But what if we told you there's a type of jellyfish that is more menacing than the most threatening shark. It goes by the scientific name Cubozoa, but is more commonly referred to as the "box jellyfish."

Unlike their annoying cousins, the box jellyfish has a powerful venom. How powerful? One type of "boxie," Chironex fleckeri, also known as the Australian box jellyfish, is so poisonous that if one of its 6-foot-long (1.8-meter-long) tentacles touches you, it's possible you might die before you reach the shore. It is considered the most venomous marine animal on the planet.

On the other hand, if you were stung by the Lilliputian Carukia barnesi, you might beg to die because the pain, vomiting, headaches and anxiety are beyond excruciating. Occasionally fluid will fill the lungs, and if left untreated, could result in death.

Boxies generally live in their own neighborhoods in the Indo-Pacific Ocean and in the waters off Northern Australia, although they also inhabit the waters around Hawaii and off the Gulf Coast and East Coast. Only a handful of species can be found in all three oceans.

Also known as sea wasps and marine stingers, box jellyfish, a class that includes 50 described species, can have up to 15 tentacles with about 5,000 stinging cells, known as cnidocysts. Each of those cells contains a tiny capsule that can fire microscopic stingers into its prey at more than 37 miles [60 kilometers] per hour, releasing a toxin that cause a rapid spike in blood pressure, which causes the heart to seize up and kills the victim.

Although no one has kept an official fatality record, between 20 and 40 people die each year from box jellyfish stings just in the Philippines. Experts say the mortality rate around the world is higher than what's reported because doctors often misdiagnosis the symptoms or simply get the cause of death wrong. What is known, is that the 43 species of box jellyfish cause more deaths and injuries than sharks, stingrays and sea snakes. You'd have better odds of surviving if bitten by a black widow.

Box jellyfish are a curious breed. For one thing, they have two dozen eyes, most of which have lenses, corneas and irises. In other words, they can see. The anatomy of a regular jelly fish only allows them to distinguish light from dark. Box jellyfish also have a more advanced nervous system then their cousins, allowing them to quickly avoid, and engage, objects.

Here's what might be the worst part: unlike other species of jellyfish who wait for their meals, boxies swim as they actively hunt their prey. They propel through the water at 4 miles per hour (6.43 kilometers per hour) by opening and shutting their bell-shaped heads, like an umbrella in a rainstorm.

Dr. Angel Yanagihara, a marine biologist at the University of Hawaii at Manoa, and the world's foremost expert on box jellyfish, says that the box jellyfish does not release venom like a rattlesnake. Instead, when a box stings, it releases a "digestive cocktail" that helps the creature catch and digest its meals. In humans, however, Yanagihara says that digestive cocktail acts like a "molecular buckshot...causing holes in all our cells." A person's heart can stop in as little as five minutes.

Box jellyfish are among the oldest animals on the planet, dating back at least 600 million years, surviving several mass extinctions. Their numbers, as that of all jellyfish, are growing, exacerbated by warming oceans, and oxygen-depleting fertilizers that eventually find their way into the water.

"We're a greater threat to them, than they are to us," says Yanagihara, who has been stung several times by boxes and survived.

Now That's Interesting
What should you do if stung by a box jellyfish? Yanagihara studied the most common remedies, such as removing tentacles, rinsing the bite with vinegar or applying ice. She and her colleagues found that those and other common remedies made the sting even worse. She says that the best way to treat a box jelly sting is to quickly apply a venom-inhibitor cream she helped create — Sting No More — and seek immediate emergency assistance.