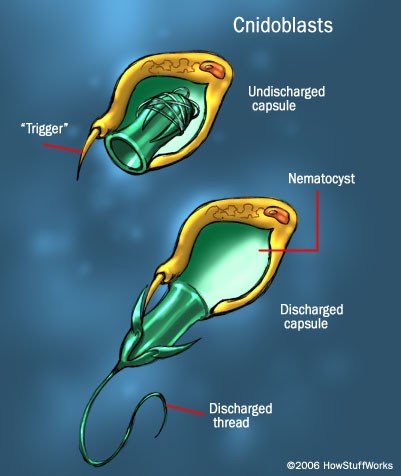 You may have been stung by a jellyfish on a trip to the beach or a dip in the ocean. But, while most jellyfish stings do little more than annoy you, the sting of the box jellyfish can literally scar you for life -- if it doesn't kill you first.

The venom of this pale blue, almost transparent, invertebrate is among the most deadly in the world, capable of killing a human in under five minutes [source: Thompson]. This animal has enough venom to take out 60 adults [source: Bartalucci]. Also called sea wasp and marine stinger, the box jellyfish injects its venom by way of the many tentacles dangling from its bell, or body. (The box jelly gets its name from the boxy shape of its bell.) Each tentacle contains about 5,000 stinging nematocysts, housed in cells called cnidoblasts. Nematocysts are like little stinging darts that fire whenever the tentacle comes in contact with chemicals on the surface of its prey. (You can learn more about various species of jellyfish by reading How Jellyfish Work.)

With up to 15 tentacles growing from each corner of the jelly's bell, and each one reaching a possible 10 feet (3 meters), that's a lot of miniharpoons ready to deliver venom into a victim's body. A single encounter can leave you with thousands of stings, and the powerful venom doesn't waste any time getting to work. Many victims stung at sea go into shock or die of heart failure before they can even reach the shore [source: ­National Geographic].

Not only is the box jellyfish venom damaging to the heart and nervous system, it's also dermonecrotic, meaning it's capable of killing skin cells and underlying tissue, leaving you with dead, blackened skin and potentially permanent scarring. To make matters worse, your initial instinct to shake the offending stingers off makes the tentacles contract and stick tighter to your skin, possibly releasing even more stingers into your already burning flesh.

Thankfully, there's somewhat of a cure if you can get to it fast enough. Acetic acid solutions like vinegar have been shown to render the stinging cells harmless, preventing them from firing more toxins into your body. (Antivenin is also available.) Or you could just do what some savvy Aussies do and wear women's pantyhose when you head out to the beach. Apparently nylon prevents the jellies from stinging since they can't detect the chemicals on your skin.

Australians have quite a bit of experience dealing with deadly creatures. Many of the world's most venomous offenders live Down Under. Along with the box jelly, which lives mainly off the coast of Northern Australia and throughout the Indo-Pacific region, the island continent lays claim to several other specimens vying for the grand prize of most venomous animal. Find out which one claims that top spot on the next page.