Browse the article How can an octopus make itself look like another animal? 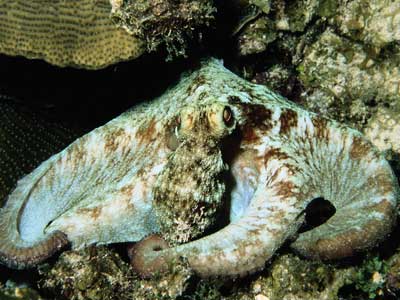 The octopus can alter its color and skin texture to blend into its surroundings. See more animal camouflage pictures.
James Gritz/Getty Images

Impersonating a police officer to get yourself out of a jam could land you in jail. But in the natural world, mimicry is a relatively common -- and handy -- device to escape trouble. Like tossing on a blue uniform and a badge, some insects and animals copy colorations and patterns of poisonous or otherwise dangerous species to fake out predators. Others employ camouflage techniques to blend into their surroundings in seconds and become barely detectable.

For instance, viceroy butterflies bear a close resemblance to monarch butterflies. Both are golden orange with black stripes and spots. But they taste much differently from each other. Avian predators steer clear of monarch butterflies because they have a bitter quality and don't make for an appetizing meal. Viceroys are much more palatable, but the butterfly gets passed over because of its likeness to the monarch.

If you travel underwater, you'll find a host of imposters of poisonous fish that scare away predators. When threatened, the comet fish takes advantage of its resemblance to the common moray eel. It has the same coloration as the eel, and a spot at the end of its tail looks like an eel's eye. As a result, when the comet fish is being attacked, it swims headfirst into a hole, allowing its "eel head" to wag out the other end and deter the predator [source: Turner].

The octopus's body is readily equipped for disguise. You might not think that octopuses would need to hide from anything in the sea -- they seem pretty menacing with eight tentacles and bulbous heads. But in actuality, these cephalopods have plenty to watch out for because their soft bodies are scrumptious feasts for sting rays, sharks and other aggressive fish. When the heat is on, octopuses can literally shape-shift in moments to completely alter their appearance. Sacs of yellow, red, brown and black pigment called chromatophores cover their bodies and allow them to change colors and patterns by contracting their muscles. Tightening certain muscles can also transform the texture of their skin to look like the smooth ocean floor or a craggy reef.

Sound impressive? That's child's play compared to what the mimic octopus can do. 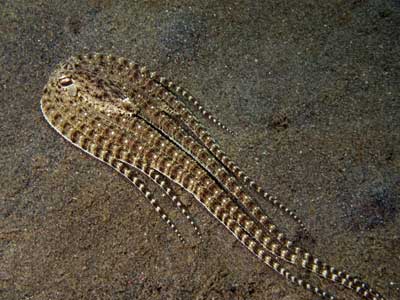