Browse the article How Squid Work

More than 300 years ago, stories began circulating about a many-armed beast with tentacles as tall as a ship's mast living in the ocean depths. One squeeze of this monstrous creature's enormous arms "could entangle a ship of five hund­red tons and hurry it into the abyss of the ocean," Jules Verne wrote in his classic science-fiction novel, "20,000 Leagues under the Sea."

Although no such creature actually exists, the legends are­ likely based on sightings of giant squid, real but elusive creatures that can reach lengths of 60 feet with tentacles up to 30 feet long. Few animals have inspired as much wonder and fear as the giant squid.

­The giant squid's smaller cousins are better known, though no less fascinating. Squid are swift, agile and surprisingly intelligent creatures with brains closer in proportion to those of mammals than those of fish or reptiles.

In this article, you'll get to know the often misunderstood squid, meet some of the unusual animals that are part of this species, and find out what happened when scientists finally came face-to-face with the mysterious giant squid.

Squid are actually mollusks, although they look much different from their relatives the gastropods (snails), and bivalves (clams). Unlike other mollusks, which have a hard outer shell, squid have a soft outer body and an inner shell. Squid are part of the class Cephalopoda (meaning "head-footed"), a group that also includes the octopus, cuttlefish and nautilus. Cephalopods are divided even further into the eight-armed octopods (octopuses) and the 10-armed decapods (cuttlefish and squid). 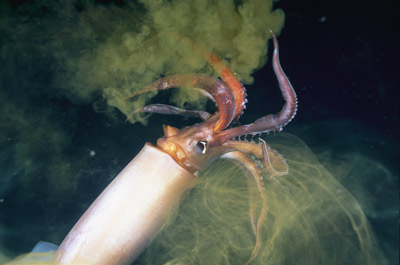 Brian J. Skerry/National Geographic/Getty Images
With angry eye and a cloud of ink, a jumbo squid flees from a diver.

In the depths of the Atlantic and Pacific Ocean, pairs of glowing red eyes cut through the gloom. They belong to the vampire squid from hell (Vampyroteuthis infernalis), part of its own squid order -- Vampyromorpha. The vampire squid's sinister name comes from its appearance -- it has red eyes, a black body and webbed arms that resemble Dracula's cape. Despite its intimidating appearance, however, the vampire squid is actually quite docile. It sits motionless in the water until its prey approaches, and then it catches the food in its webbed arms.

For thousands of years, people have told tales of giant, many armed sea monsters. In Homer's "Odyssey," Odysseus had to navigate his boat around a many-headed sea monster called Scylla. Jules Verne later wrote of giant squid attacking the Nautilus submarine in "20,000 Leagues under the Sea." These legends were likely based on real sightings of the giant squid (Architeuthis), the world's largest invertebrate, and the biggest member of its species.

In recent years, scientists have also learned more about the giant squid's equally intimidating relative, the colossal squid (mesonychoteuthis hamiltoni). In 2007, a New Zealand boat was on a fishing expedition in Antarctic waters when its lines snagged something much larger than fish. The fisherman struggled for nearly two hours to pull the colossal squid onto the boat. It weighed 990 pounds, and, according to news records of the event, had the squid been cooked, it would have produced calamari "the size of tractor tires." The colossal squid was frozen and taken to New Zealand's national museum for further study.

For lots more information about squid, check out the links on the next page.