Browse the article This Organism Is Part Plant and Part Animal 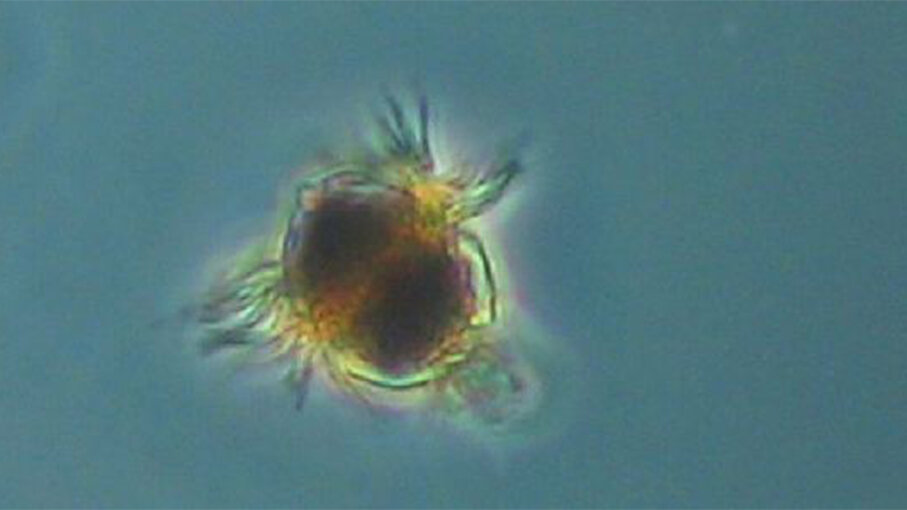 Mesodinium chamaeleon is an unusual organism of the genus Mesodinium which symbiotically combines aspects of both animal and plant biology. Wikimedia Commons (CC BY-2.0)

It's usually pretty easy to tell plants and animals apart. Plants stay in one place and make their own food from sunlight. Most animals move around and have to find food, often plants.

But a single-celled organism called Mesodinium chamaeleon blurs the line between animal and vegetable. When this tiny creature comes into contact with algae, its cell membrane encircles the algae to form a food vacuole, which is a membrane-bound chamber in which ingested food is digested. Normally, enzymes enter food vacuoles and digest what's inside, which is how the organism gets energy. But instead of being digested, algae lives inside M. chamaeleon vacuoles like tiny solar panels turning sunlight into energy, which M. chamaeleon then consumes.

Somehow M. chamaeleon and algae are able to sidestep normal cell processes. Why don't the vacuoles destroy the algae? How does M. chamaeleon keep the algae alive even though it's an animal and they're plants? Lots more research needs to be done to find out at what point the algae is consumed, how it's maintained in the vacuole and exactly how much energy M. chamaeleon gets from it.

Algae and M. chamaeleon have an endosymbiotic relationship – two organisms benefit from living and working together, and one lives inside the other. This kind of arrangement isn't new. Corals have been teaming up with algae for millions of years in happy endosymbiosis. Algae cells live inside coral polyps, the tiny animals that make up coral reefs. Algae are protected and get compounds from the coral they need for photosynthesis. Algae supply nutrients that feed the coral.

But unlike coral, M. chamaeleon does eventually eat its algae. It's also unlike other Mesodinium species, which either eat their captured cells right away or host them indefinitely. M. chamaeleon might represent that in-between, predator to partner, stage of biological evolution.

Now That's Interesting
Most algae are microscopic, but some are huge. Kelp, the largest algae, can grow up to 200 feet.