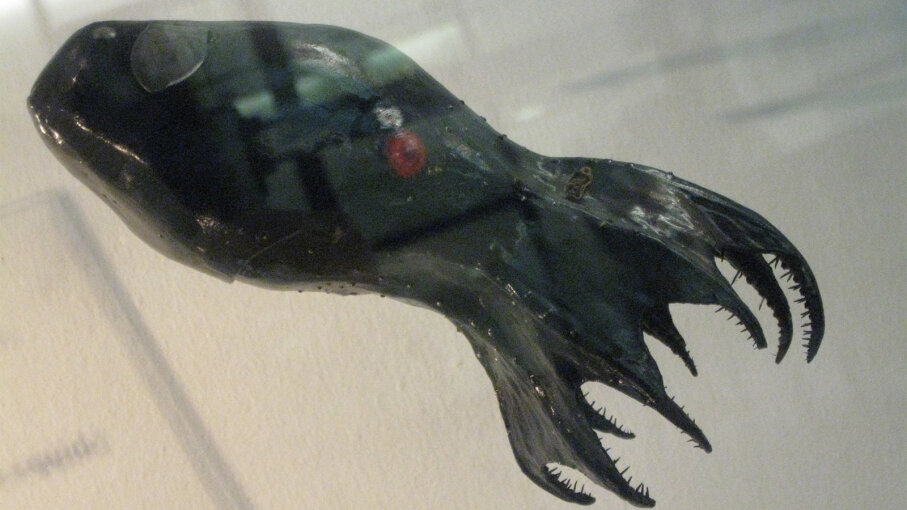 The vampire squid (Vampyroteuthis infernalis), shown here in a model, isn't actually a squid, and though its scientific name means "vampire squid from hell," it isn't really a vampire either. Robynne Blume/Flickr (CC By 2.0)

You've probably heard. The ocean is mysterious — arguably even more mysterious than space. But unlike space, the ocean is teeming with a stupendous array of living things. We haven't described even a fraction of these organisms, but luckily, we're familiar with the vampire squid.

The vampire squid (Vampyroteuthis infernalis) isn't actually a squid, and it definitely isn't a "vampire squid from hell," which is what its scientific name translates to. It's a cephalopod like octopuses, squids and cuttlefish, but the vampire squid has a taxonomic order all to itself. And that's because it shares traits with both squids and octopuses, and not because it's a bloodsucking, undead creature of the night — although where it lives, it's always pretty dark.

The ocean, like the atmosphere, has strata. Vampire squid live in the mesopelagic zone of the open ocean, which starts where the sunny, productive epipelagic zone at the surface ends, down at around 660 feet (200 meters), giving way to the mesopelagic's dim, deep "twilight zone" that extends to around 13,300 feet (1,000 meters) below the surface.

Like many other mesopelagic animals, vampire squid dine on bits of dead plant and animal matter that fall down from above. Though these crimson, becaped misfits look threatening with their dark, spiny underbellies, they're not hunters and have very few defenses. Their self-defense options are to turn themselves into a squashy, black, spiny ball like a pair of socks, or to spray junk at their enemy. Cephalopods living in shallower water protect themselves with jets of dark ink, but since vampire squid already live in the dark, they squirt out a colorless, bioluminescent fluid to confuse potential predators.

Vampire squid also have little lights at the end of their eight long, suctionless arms. Nobody's completely sure what they're for, but they might use them to communicate with other vampire squid they meet. But what we do know is, they're definitely not using them to hypnotize anybody and suck their blood.

Now That's Interesting
Since vampire squid are uncommon, males and females mate when they encounter each other, and females store the male's sperm for later.