by Colleen Cancio
Prev NEXT
8

Known as the "King of the Terriers," the Airedale is an elegant and self-confident animal. They are also alert and energetic, though perhaps a bit more independent than other terrier varieties. This breed is also larger and considerably stronger than the other members of the terrier family, making this an ideal choice for family guard dog.

If you're in the market for an Airedale Terrier, it's important to keep in mind that this is a more high maintenance dog than some of the others on the list. They're whip smart and highly trainable, but they also need to be engaged intellectually and physically. No lazy afternoons on the sofa for this dog. There is also no way unwanted guests can ever sneak into your home with an Airedale around -- it's simply too high-strung to allow it.

Airedale terriers are considered to be good with kids, but this can vary among individuals within a breed. For the most part, dogs that grow up with kids and have positive experiences with them tend to be good with them. The key is to socialize early. 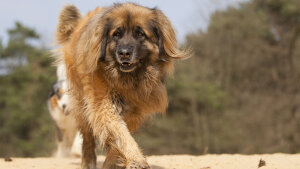