5 Games Kids Can Play with Cats

Browse the article 5 Games Kids Can Play with Cats 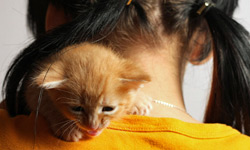 If your cat and your child aren't already best friends and co-adventurers, read on for five activities that can bring them closer together.
Hemera/Thinkstock

Most cats love to play because it mimics some of their natural hunting instincts -- like pouncing and batting -- but their sharp claws and teeth can hurt, causing many parents concern about allowing their frisky feline near their children. There are ways you can make playtime safe and happy for both, but it starts with education.

Before introducing your child to any pet, make sure she understands how to properly handle an animal. Small kids tend to grab at tails and ears, so teach your child to avoid pulling on any cat's extremities. Never encourage a cat to swat at your hands, feet or other parts of your body, and show your child how to aim prey-simulating toys away from herself to avoid getting pounced on.

It's also a good idea to teach your child how to read your cat's body language to know when kitty wants to play and when he's had enough. The American Society for the Prevention of Cruelty to Animals recommends at least 10 minutes of playtime twice daily for most cats [source: ASPCA].

To figure out what times of day your kitty is most receptive to play, try switching up the schedule to see if he is more inclined to participate before meals or in the evenings. Once you've determined the best times to interact with your cat, and after your child has demonstrated that she understands the rules, it's playtime! But what are the best games and activities for cats and kids? In this article, we'll explore five safe and fun ways for all of your little ones to play together.

If your child is into video games, computers and other technology, playing with cat toys could get boring fast. Luckily for your child and cat, there are a variety of apps and games made for tablets, smartphones and computers that could engage them both. Gone are the days when your cat had to actually leave the couch to chase a mouse -- now he can chase one on a screen.

Most cat apps feature some sort of moving object on the screen, like a mouse, to entice your cat to paw at it. When he interacts with the app, it may make a sound to keep the cat engaged. Even games not intended for cats have proven to be feline crowd pleasers, like Koi Pond, which features fish floating by. Just make sure kitty's claws are trimmed to avoid a costly scratch to your equipment.

Some cats might show an interest in certain tunes by coming into the room where they're playing, meowing or even caterwauling along. Other cats have been known to curl up on top of stereo speakers to feel the soothing beat. And you don't have to search long on YouTube to find a cat playing the piano. Some animal behaviorists believe that certain sounds imitate feline noises, which might explain why many cats show an interest when musical notes are played [source: Lang].

Ask your child to help you discover if your feline has a musician's ear by planning a soundtrack for your cat's regularly scheduled playtime. Allow your child to select the music and consider introducing a new toy, like a pole with a string and fuzzy lure on one end, that your little one can use to play with kitty, moving it to the beat. If you have a piano or keyboard, see if your cat shows an interest by slowly introducing him to the instrument. Let your cat explore the area and play a few of the keys to get his reaction. It won't take long for you and your child to know if your cat is the next Chopin.

In 2007, Charlie Schmidt of Spokane, Wash., posted a video to YouTube of his cat, Fatso, playing the keyboard. Schmidt was actually manipulating Fatso's paws, but the video became a widespread Internet meme, making Keyboard Cat a pop culture phenomenon. 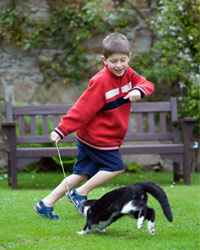 A wand toy can get both your kid and your cat up and moving.
Hemera/Thinkstock

Arts and crafts are a great way to get younger children involved in feline playtime without worrying about bites or scratches. Consider building a kitty fort out of old cardboard boxes. Pull out the markers, crayons, stickers and any other materials you have on hand and let your little ones decorate the boxes -- inside and out!

Once decorated, help construct the fort by cutting and taping the boxes together. Cats love to explore new areas and should be curious to check out the new digs. If he seems hesitant, place a favorite toy inside the fort to encourage him in.

If a fort seems too laborious or time intensive, try making a wand toy for your cat, which is simply a long stick with feathers, ribbons, bells or fabric tied or glued to one end. This is a good cat toy for young children because they can hold the wand away from their body, which will allow your cat to swat at the end of the wand instead of at your child. Just make sure you batten down any small, loose materials that could be a choking hazard to both your small child and cat. 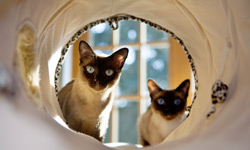 Some cats will take to an obstacle course immediately -- others might need some convincing.
iStockphoto/Thinkstock

Cats love to climb and explore their surroundings, so a great way to change up playtime is to have your children create an obstacle course for your cat. Look around the house for objects your cats could climb on or walk through, like laundry baskets, hula hoops, boxes and stacks of books. Once your child has set the course up, have her walk the cat through the obstacles, using a favorite toy or (for advanced cat trainers) a clicker to entice the cat into follow along.

After kitty has run the gambit a few times with encouragement, see if he will attempt it on his own. Give your child a stopwatch and make a game out of keeping time. After your cat has mastered the course (or grown bored with it), your child can switch it up by moving the objects around to create an entirely new challenge. 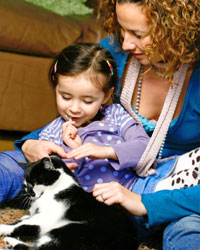 Show your young child how to pet a cat gently, and praise both cat and kid for good behavior during playtime.
Hemera/Thinkstock

There are a wide variety of toys for cats, but picking one that your child and cat will both enjoy could pose a challenge, since most felines aren't great sharers. In order to develop the bond between child and cat, allow your child to be the dispenser of toys and treats in the family, letting her pick out the toy of the moment and give it to the cat. Most felines love balls because the movement mimics prey, so it's possible that your child could teach your cat to play fetch. This does require a level of patience on behalf of all parties involved, as most cats will catch but not return a tossed toy.

Other great toys for cats include treat balls that your feline must bat and spin to finagle the treats inside to fall out, as well as battery-operated toys that interact with your cat by automatically moving objects around and enticing kitty to pounce. These toys won't do much to entertain your child, but your cat's hilarious reactions will.

No matter what game or activity you try with your cat and child, the time spent together is most important. Don't forget to always supervise any interaction between animals and young children to ensure a happy playtime for all. 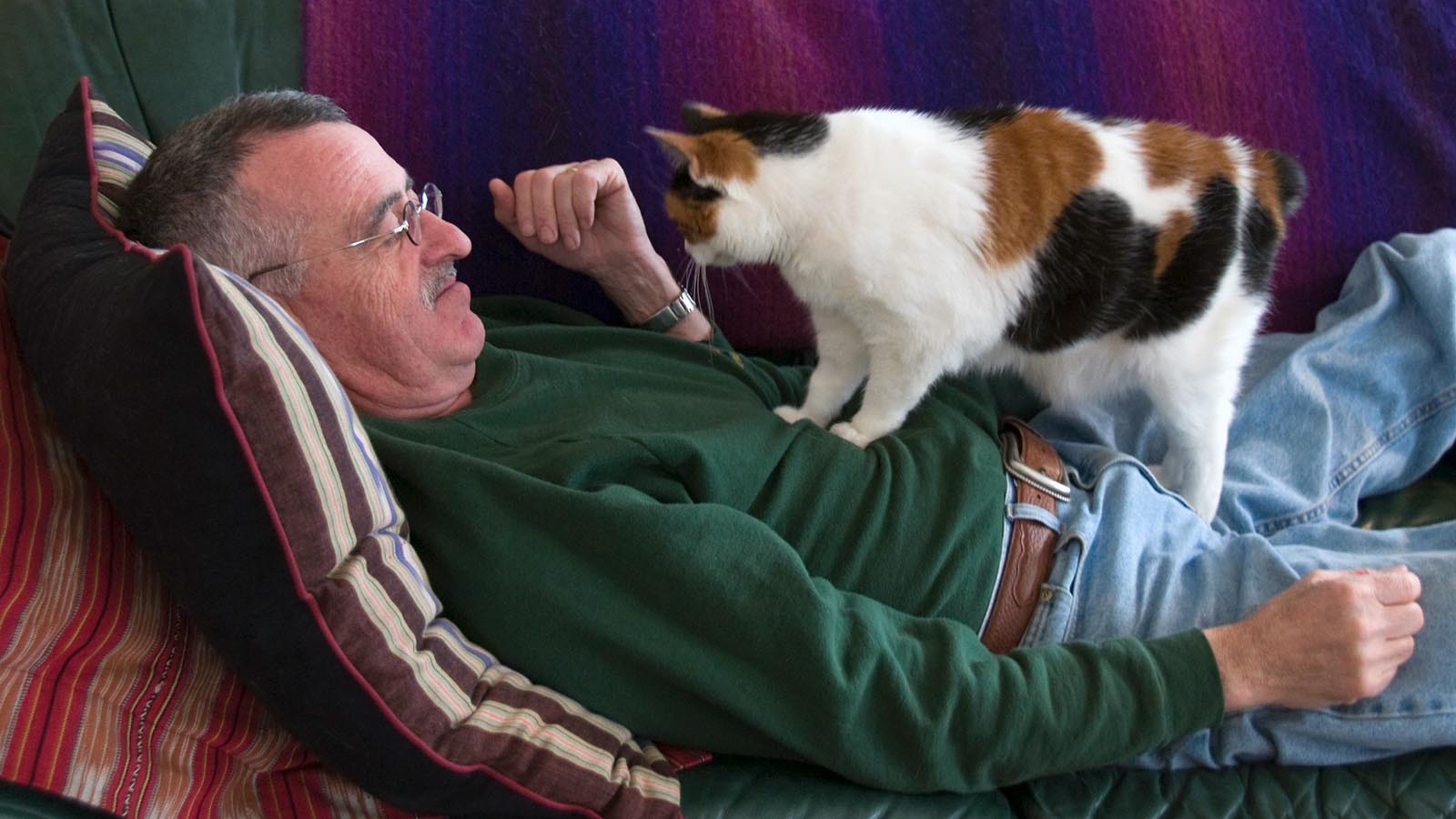