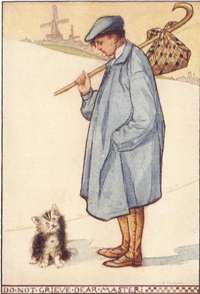 Puss in Boots was one of Mother Goose's fairy tales.

They say, "Dogs have masters, cats have staff." That certainly rings true for these famous felines. Some are real, some are fictional, but either way, they don't answer to anyone.

A cat that eats lasagna? That would be Garfield, the star of the most widely syndicated comic strip in the world. Created by Jim Davis in 1978, Garfield now appears in more than 2,500 newspapers, as well as movies, TV specials, and video games. The pudgy orange-and-black feline is best known for his love of Italian food, his disdain for Mondays, and his constant tormenting of his canine pal, Odie.

Rescued from a Hinsdale, Illinois, shelter in 1968, Morris, the 15-pound, orange-striped tabby went on to earn fame and fortune as the "spokescat" for 9Lives cat food. He also starred opposite Burt Reynolds in 1973's Shamus and even ran for president in 1988 and 1992 on the Finicky Party platform.

The Cheshire cat first appeared -- and disappeared -- in Lewis Carroll's children's story, Alice's Adventures in Wonderland. The cat pops in and out of Alice's adventure, often turning her innocent queries into philosophical discussions. But the scene that forever seals the Cheshire cat's place in history is when he makes the rest of his body gradually disappear, leaving only his smile behind, hence the phrase "grinning like a Cheshire cat" to describe someone with a mischievous grin.

Socks knew a good thing when he saw it. The eventual First Cat joined the Clinton family in 1991 when he jumped into Chelsea's arms at her piano teacher's house in Little Rock, Arkansas. Socks, a black-and-white kitty, spent eight years in the White House and became a star in his own right, appearing on an episode of Murphy Brown and inspiring two books: Socks Goes to Washington: The Diary of America's First Cat and Dear Socks, Dear Buddy: Kids' Letters to the First Pets. When the Clintons left the White House in 2001, Socks was given to Clinton's secretary, Betty Currie. Socks still lives with the Curries in Maryland.

The Cat in the Hat is a troublemaker of the most lovable sort. A creation of whimsical children's author Dr. Seuss, the cat attempts to entertain two children who are stuck inside on a rainy day. He wreaks a bit of havoc and upsets the family goldfish to no end, but all is well by the time Mother returns home. The black-and-white cat, with his signature red-and-white striped top hat and red bow tie, first appeared in the classic tale in 1957. He has since appeared in numerous books, TV specials, and in the 2003 live-action movie of the same name, which starred Mike Myers.

Don't mess with Catwoman, as Halle Berry will attest. The Oscar-winning actress portrayed the infamous comic book character in 2004's Catwoman and in the process, earned herself critical pans and a Razzie Award for worst actress.

Catwoman first appeared in the Batman comic book series in 1940 as an expert burglar with above-average agility. She's been portrayed by actresses such as Julie Newmar, Eartha Kitt, and Michelle Pfieffer, all of whom remained fairly true to the original character's signature traits. But when Berry's character departed from the Batman story line, the claws came out.

Audrey Hepburn won an Emmy, a Grammy, an Oscar, and a Tony. But did she ever win a Patsy? Nope, that honor belongs to her Breakfast at Tiffany's costar, Orangey. The orange-and-black tabby that portrayed Holly Golightly's lazy cat in the 1961 classic actually broke onto the Hollywood scene in 1951's Rhubarb, a movie about an eccentric millionaire who adopts a feral cat. Orangey won his first Patsy (Picture Animal Top Star of the Year) for the Rhubarb role, so awards were old hat by the time he shared a screen with Hepburn. Orangey also appeared in Gigot (1962) alongside Jackie Gleason and in the 1950s sitcom Our Miss Brooks.

Puss in Boots began life as a boot-wearing hero that used his feline wiles to gain wealth for his impoverished master in a collection of Mother Goose fairy tales published in 1697. He went on to become the star of a 1913 opera by Cesar Cui and made numerous film appearances, including a 1922 animated short by Walt Disney, a 1969 Japanese anime feature, and Antonio Banderas's character in the Shrek sequels.