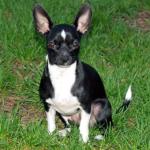 Tiny Tim, a Chihuahua and shih tzu mix, is the tiniest dog ever. See more pictures of dogs.

Everyone who has ever loved a dog feels that their dog is the best dog ever. We're not about to get between a man (or woman) and their best friend, but here are a few dogs that truly stand out in a crowd of canines.

In 1998, Russian wolfhound Olive Oyl of Grayslake, Illinois, made the Guinness Book of World Records when she skipped rope 63 times in one minute.

Measuring three inches tall at the shoulder and four inches long from wet nose to wagging tail, Chihuahua and shih tzu mix Tiny Tim of London holds the record (as of 2004) for being the tiniest dog ever. The little guy weighs just over a pound.

The Quietest Dog: The Basenji

A yip or a yap, a whine or a woof -- if you don't want a barking dog, consider a basenji. The favorite dog of ancient Egyptians, this breed is incapable of barking, instead uttering a sound called a yodel, which makes them perfect for those living in an apartment with thin walls or touchy neighbors.

The Heaviest (and Longest) Dog: Zorba

The oldest dog reliably documented was an Australian cattle dog named Bluey. After 29 years and 5 months of faithful service, Bluey was put to rest in 1939. We can only hope that now Bluey is chasing cows in the big cattle ranch in the sky.

Okay, so any dog serving its country as a SAR dog gets the "Most Courageous Dog" distinction, but the SAR dogs that waded into the rubble in the wake of the terrorist attacks on September 11, 2001, get an extra gold star. Hundreds of SAR dogs scoured the debris and braved the chaos in the days following the attack. While German shepherds are often trained for SAR duties, any working, herding, or sporting breed can be trained to be a hero.

The Dog that Might Score Low on an IQ Test: A Hound

We couldn't bring ourselves to say dumbest, but it looks like the hound group is given this reputation most often. Hounds weren't bred for taking IQ tests, or doing much of anything except hunting and following scents, so expecting them to quickly learn how to sit or stay is a big mistake. It's just not in their nature, so have patience with your hound -- they're not dumb, they're different.

Dog Most Likely to Help You with Your Algebra Homework: The Border Collie

Border collies are widely regarded as the smartest of dogs, since they have been bred to work closely with humans for centuries. Again, different dogs are better at certain tasks and are more apt to thrive in different environments. However, collies can appear hyper and less-than-brilliant if they're not given enough stimulation.