What are the common symptoms of a sick cat? 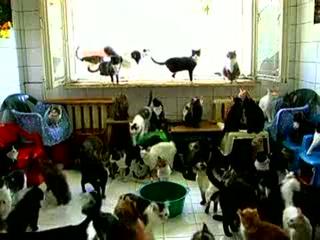 Just as people come down with various illnesses, and display certain symptoms, pets can also get sick. Just as a doctor is the person to go to when you're stumped concerning your own sicknesses, a veterinarian is the professional to make an appointment with when you're clueless concerning your cat's health. Telling the vet that your cat is acting funny isn't giving him enough information, and the cat might be too nervous to behave “funny” in the vet's clinic. Describe more specifically whether acting funny means coughing or choking, shaking or walking unsteadily.

Another symptom that points to a sick cat is lack of appetite. Here you have to differentiate between the cat having no interest in eating or if it comes eagerly to eat its food, but then just picks at it. Similarly, if your cat eats everything and anything but doesn't put on any weight or actually seems to be losing weight, this could indicate a problem. Yet other things to look for are any change in habits of elimination. Are your pet's stools well formed or has the furry little thing got diarrhea? Is any blood or mucus present?

The color of the skin on your cat's gums can signal different illnesses. Healthy cat gums should be pink, so if they're white, your vet might want to check if the cat is anemic. A yellow color points to liver problems, and a blue color could tip you off to an oxygen intake problem, perhaps due to poisoning or respiratory problems.

Is your cat well-groomed or is his disheveled appearance a sign that it's sick? Does your cat lick itself so much that it's getting bald in some places? It could be due to a skin problem, fleas or stress. All these symptoms should be checked out with a vet.