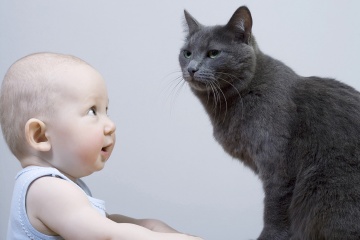 Cats get a bad rap. Yes, you need to keep an eye on them around babies, but no more than any other animal. (Actually, less than most others.)
Thinkstock

Every year, more than 4,000 infants die in the U.S. alone of causes that are not immediately known [source: CDC]. While a small portion of these deaths are blamed on accidental suffocation or strangulation, the remainder are attributed to sudden infant death syndrome or simply to "causes unknown."

At the start of the 21st century, with all we know about medicine and science, we're still faced with thousands of unexplained baby deaths each year. It makes sense then that people living in earlier times when infant mortality was much higher were looking for a cause or explanation for these types of deaths, and decided to blame it on the cat.

Cats are extremely convenient scapegoats thanks to their link to witchcraft and evil. In 1233, Pope Gregory IX himself decreed that black cats are incarnations of the devil, leading many to round these cats up and kill them off in an attempt to keep the devil at bay [source: Waddell]. With his wicked reputation, it's no surprise that people also blamed the cat for unexplained baby deaths by accusing him of sucking the breath out of the baby.

This myth became so prevalent that the following item was found in the Annual Register from 1791, "A child of eighteen months old was found dead near Plymouth, and it appeared, on the coroner's inquest, that the child died in consequence of a cat sucking its breath, thereby occasioning strangulation" [source: Notes and Queries].

While this myth lingers to this day, it's taken on a slightly more believable air. Drawn by the sweet scent of milk or seeking a bit of warmth, cat's will snuggle up to the baby, inadvertently suffocating the child rather than deliberately sucking out his breath. A cat was originally blamed for a case of sudden infant death syndrome in the U.K. in 2000, when the mom of a 6-week-old baby claimed she found the cat laying on his face before discovering the baby was dead. Upon further research, authorities determined that the child died of SIDS, not suffocation [source: Lakeman].

Despite the fact that cats sucking the breath out of babies is a definite myth, parents should still do their best to keep the cat out of the crib. Think of the cat as a loose object; just as you'd keep blankets, pillows and other loose objects out of the crib, you should also keep the cat out to avoid suffocation, which could occur if the baby were to press his mouth against the cat's soft body [source: Providence Health and Services]. If your favorite feline insists on sleeping in the crib, use netting or a crib tent to force him to steer clear.