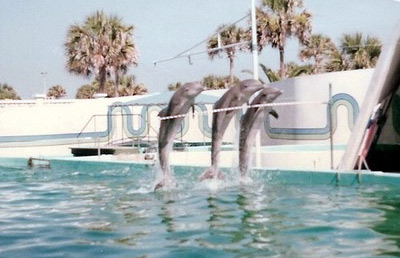 Keller and Marian Breland were students of B.F. Skinner and expanded his techniques to train a variety of different kinds of animals. In the 1950s, Keller Breland began developing a training program for marine mammals. For obvious reasons, it is difficult and dangerous to design an effective punisher for a dolphin or an orca. It is also challenging to reward a marine mammal promptly because they are in the water, and the trainer is often some distance away on land.

Many of the same problems are inherent in training dogs. If a dog sits, then jumps up, spins around and is given a treat, it will probably not know which part of the performance pleased the handler. This is especially true if it took a minute for the trainer to pull out the treat and present it to the dog. Typically, the dog will pair the reward with the final behavior that it performed before it got the treat. So if the dog sat, then jumped up and got a treat, what it's really being trained to do is jump up, not sit.

This is also true of punishers. If a dog runs away from its owner and engages in a game of hide-and-seek, it is natural for the owner to punish the dog when he catches it. However, the last thing the dog did before being punished was come to the owner. So coming when called is the behavior that is likely to decrease, instead of running away.

Breland solved this problem by designing a marker, or cue, that would let the animal know it had performed correctly and would be getting a reward shortly. Breland used classical conditioning to pair a marker signal with a reward, so that when the animal heard the signal it knew it would be getting a reward. Then he used operant conditioning to shape behavior using positive rewards.

The marker helps to reinforce the correct behavior because it is immediate. The marker is not the reward; it is simply a signal that the behavior was correct and a promise of a reward to come. Because marine mammals are naturally oriented towards communication via sound, it made sense to use a whistle blast as the marker.

Karen Pryor used the same positive reinforcement techniques in the 1960s to train dolphins. She realized the broad applications of this type of behavioral modification and in 1984 she authored the book "Don't Shoot the Dog," which, despite the title, is not really about dog training. It covers using positive reinforcement to shape the behavior of anyone from pet cats to difficult teenagers. Many businesses still use this book to teach their employees about effective management.

Pryor used a metal clicker as a marker to begin shaping the behavior of dogs, as well as many other animals and hers is the name most commonly associated with modern clicker training. Her techniques were adopted by other trainers and with the advent of the Internet, clicker training spread rapidly.

Karen Pryor describes the click as taking a picture of the behavior that you want; you snap it in that second. The click means, "you did something, it was the right thing, and you will be getting a treat for it."

Many beginning trainers make the mistake of clicking to mark a behavior, but then not following the click with a treat. With no actual reward, the dog may continue to offer the behavior for a while but it will eventually disappear.

Next, we'll learn how to introduce commands.

A marker doesn't have to be a clicker. It can be anything that marks the desired behavior. Dolphin trainers often use whistle peeps. Fish can be trained by flicking a flashlight on and off, and vibrating collars can mark behavior for deaf dogs. Some people mark behavior with a particular word, like "yes!" The marker can be anything that is short, specific, and consistent. On those grounds, care must be taken when using the voice as a primary marker because tone is often inconsistent and marker words or sounds may also be used in regular conversations and lose meaning for the dog. 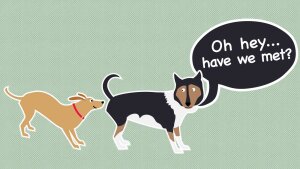