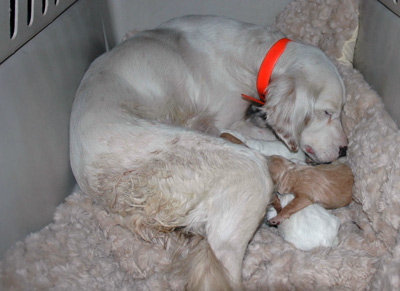 Even if it's clear that dogs are descended from wolves, it is less obvious how this came about. The conventional view, and one widely represented in both fiction and nonfiction, is that prehistoric people took wolf pups from their dens and reared them to think of people as their "pack." These tamed wolves lived with people and reproduced. The people that cared for them treasured individuals with odd coats or heavier bone structure, which might have meant death in the wild. Over time people began to breed these wolf-dogs selectively until they eventually created the diversity of dogs we see today.

The problem with this theory is that the initial shift from wolf-like to dog-like traits could only have happened very slowly. Wolves are relatively uniform in appearance, so the odds of a mutation appearing randomly in a captive population are small. It would have taken many thousands or even millions of years to get much diversity. Yet fossil evidence shows that dogs appeared not all that long ago. If it's true that dogs have existed for only about 15,000 years, this is a blink of the eye in evolutionary terms. DNA evidence indicates that dogs may have begun to split with wolves as many as 100,000 years ago, but this is still relatively recent. Yet in dogs we see some of the most extreme physical diversity of any mammalian species. There is more variation in size, color, coat texture and other aspects of appearance within dogs than there is among all other members of the canid family.

So, how did it happen?

Recent publications, such as the controversial book "Dogs: A Startling New Understanding of Canine Origin, Behavior, & Evolution," by Raymond and Lorna Coppinger, present an alternative theory for the way that dogs evolved from wolves. The Coppingers suggest that some wolves "domesticated themselves." When humans went from mobile hunter/gatherer societies to sedentary villagers, they created a new ecological niche for neighboring wolves. The traditional niche for wolves is a forest predator of herbivores (plant-eaters) such as deer and elk. This niche requires wolves to be large, strong, innovative and able to learn by example.

Humans living together in a group produce food scraps and other waste, which represents a valuable food source for animals. Wolves living near people began taking advantage of these resources, and the boldest wolves got the most and survived the best.

By the time wolf pups are 19 days old, they are becoming suspicious of strangers. In contrast, dogs (like this Chihuahua mix) are willing to make connections with people up until 4 months of age.
Photo courtesy Hannah Harris

Studies with captive wolves demonstrate that while you can raise wolves to be somewhat tolerant of people, they retain a suspicious nature and are extremely difficult to train. Even wolves that have been captive bred for generations don't act like dogs.

Historically, being timid and avoiding humans was a good strategy for wild wolves, but in this case the timid wolves spent too much energy running away and weren't able to scavenge as effectively as the bolder ones. The bolder wolves survived better, reproduced with each other and had more offspring who were even bolder. One group of wolves split from the forest hunters and went down a different evolutionary path. This new group of wolves didn't need to be as fast or as creative as their ancestors. In fact, being small was now better because smaller animals require less food. The main quality that the individuals in this new group needed to succeed was to be tolerant of humans. This process was driven by natural selection.

In the next section, we'll learn how both natural and artificial selection led to the evolution of the modern dog.