The Evolution of Dogs 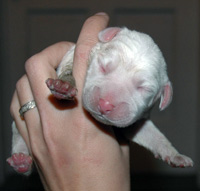 Natural selection is the process that Darwin proposed as the mechanism behind evolution. Essentially, it works like this: There is genetic diversity within any population. In animals, this genetic diversity manifests itself in physical and behavioral variations. Animals may be slightly bigger or smaller, differently colored, faster or slower, or more or less aggressive. Some of these characteristics are neutral -- they neither benefit nor harm the individual that has them. However, some of these qualities affect the ability of the individual to survive and reproduce. Animals that need to hide but are oddly colored and more visible than the rest of their species will probably die young without offspring. When that happens, the genetic variations that cause that odd coloration will be lost. This trait is selected against. Conversely, animals that have a beneficial quality will survive better and reproduce more, increasing the proportion of those traits in the population. As those traits become more common, the population overall changes as it becomes better suited to its environment. This is evolution.

Artificial selection is a similar process, but people select the traits that continue instead of "survival of the fittest." Traits favored by people may or may not be directly beneficial to the animal, but it doesn't matter as much because these are the animals that people choose to breed. For example, artificial selection for increasingly large heads in bulldogs means that many bulldog puppies must now be born by Caesarean section. This is not a trait favored in nature, but with the aid of veterinary medicine, it's possible to select for an animal with these qualities.

Where did all the diversity come from? Studies conducted on Russian fox farms may reveal the answer. In the 1950s, Russian scientist Dmitri Belyaev began selectively breeding captive silver foxes on a fur farm with the idea of making them tamer and easier to handle. He carefully chose foxes that were more tolerant of humans than the rest. Over a few generations of breeding, the foxes became tamer. However, they also developed strange coat colors and other odd characteristics, such as floppy ears and curly tails. Belyaev's new foxes barked more, and the females came into heat more often and younger than their ancestors. In fact, Belyaev's foxes had exactly the same kinds of qualities we see in dogs, but never in wolves. Why should selecting for tamer animals also create individuals with all these unusual physical qualities?

The theory is that by selecting for individuals that are friendlier and less suspicious of humans, you also affect some aspects of the developmental process. You're breeding animals that are more puppy-like in their behavior. Linked to the genes that control this extended puppyhood are other genes that affect coat color. In addition, when you lengthen the amount of time behavioral development takes, you disrupt some other types of development.

Based on the research on foxes, the natural selective pressure on village wolves to be tamer might have simultaneously created a population of wolves with all kinds of odd characteristics. Now you have a group of animals that are smaller and friendlier than wolves and that come in lots of colors. This is the point at which researchers like the Coppingers say that humans began adopting puppies and favoring some attributes over others, using artificial selection to create different types of dogs.

Milo, an example of a proto-dog, checks out a compost pile
Photo courtesy Hannah Harris

You can still see artificial selection in action in many parts of the world, where dogs exist on the margins of society and feed on scraps. These "pariah" dogs are of relatively uniform size, but vary in color. They are probably not descended from purebred dogs, as there is no local history of purebred dogs kept as pets. Instead, they represent what could be the original dog type, or proto-dog, evolved from wolves to take advantage of the niche that humans provide. People sometimes take unusual individuals as pets, and in some cases, these animals are bred and pass on these special qualities. If certain qualities are consistently favored over time, we begin to see the creation of a breed via artificial selection.

If the final process of artificial selection is the same, distinguishing between these two theories of the evolution of dogs may seem like splitting hairs. In either case, some wolves became dogs because of their association with people. However, the new (and even heretical) idea that groups of wolves evolved into dogs via natural selection means dogs are not simply domesticated wolves. They are truly their own species, shaped by the same process that created coyotes and other canids that have split from each other on the family tree. Perhaps by viewing dogs as deformed or substandard wolves created by people, we fundamentally misunderstand and underestimate them as the unique species that they are.