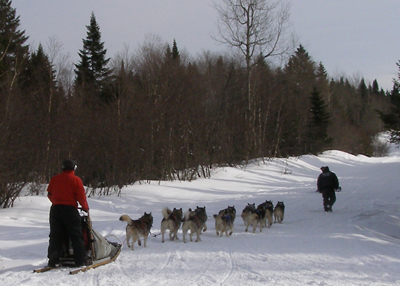 As we've discussed, dogs have been bred for very different purposes. People bred some dogs as companions. For example, "lap dogs" were bred to sit in people's laps. In contrast, other dogs were selectively bred to be active -- good at herding sheep, pursuing game, or pulling sleds. As people bred good sled-pullers to other good sled-pullers, they created line of dogs genetically programmed to pull. These dogs don't just pull for a reward -- for them, pulling is the reward. They love to do their job. This works well when what you want is to get across the icy tundra, but it doesn't work at all when what you want is a dog to heel nicely at your side. This is not to say that a sled dog can't be taught to heel, but it's uphill work because you're fighting generations of careful breeding to do the opposite.

Each year, thousands of dogs end up in animal shelters and rescue groups for doing what people have bred them to do. An Australian shepherd that doesn't have sheep may still have the drive to herd. In the absence of sheep, he may try to herd children, cats or even pinecones. But children and cats don't especially like to be herded (though pinecones don't seem to mind). Dalmatians were bred to have incredible stamina so they could run all day alongside their coaches. But this also means that they aren't satisfied with a quick walk around the block. Rottweilers were bred to drive cattle, using their powerful frames to muscle the cows along the road to market. The cows are gone, but Rottweilers are just as strong.

Breeding is more than skin deep, and it's important to research the background of any dog you're considering adding to your household. In the next section, we'll discuss the importance of finding the right dog for you.

Within popular breeds, there sometimes exist multiple lines of animals, bred with different goals in mind. A dog show is like a beauty contest. Judges are looking to see how closely the dogs resemble their breed's standards, but while the dogs are required to be well behaved, they aren't judged on the job they were designed to perform. Sometimes a good show dog isn't a good working dog. For example, a Cocker Spaniel with a long, lush coat may do very well in the show ring, but get tangled in briers.

Many dog breed enthusiasts try hard to marry both form and function in their dogs, not only showing them but also competing in field or herding trials. However, dog breeds often diverge into "show" lines or "working" lines. Sometimes the subtypes within the breed diverge so far that the people involved decide it is no longer one breed but two. There are now two kinds of Cocker Spaniel: the American Cocker, known as a family dog with a luxurious coat, and the English Cocker, a hunting dog with a shorter coat. For more, check out the article How Work.