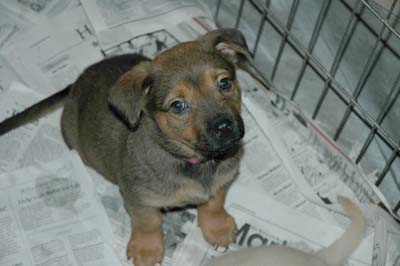 The most important instinct that dog owners have going for them is a dog's natural desire to eliminate as far as possible from its core living space. When training a dog to eliminate in a specific space indoors, restrict the dog to a certain area and then locate the newspapers or puppy pad as far as possible from its food and bedding. Alternatively, you can paper the entire area and once the puppy has identified newspaper as the "correct" substrate, gradually reduce the papered area.

Many puppy pad manufacturers claim their products contain special scents that will naturally attract puppies to use them. You can accomplish the same thing by placing a paper towel or piece of newspaper with urine on it on top of the place that you want your puppy to go. These scents tell your dog that this is a good place to eliminate. Conversely, you want to remove elimination scents as much as possible from the places that you don't want your dog to go. If your puppy has an accident, clean the area as soon as possible with an enzyme-based cleaner. Avoid products with ammonia as their primary ingredient, because the smell can mimic the smell of urine.

Just as in training dogs to go outside, you should take your puppy where you want him to go after he's eaten, when he first wakes up, and periodically through the day. Watch him carefully for signs that he needs to go, such as sniffing around or circling, and take him where you want him to eliminate. Always praise him if he goes where he's supposed to.

Cats prefer substrates with a grainy or sandy texture so they can bury their waste.
Photo courtesy Amazon

Cats chose their location based primarily on the substrate. They're picky about this, because they like to bury their waste. This gives cat owners a huge advantage over dog owners when housebreaking. All cat owners have to do is to create a bathroom area that offers a more appealing substrate than anything else does, and then teach the cat where to find it. Most cats would rather use commercial litter than just about anything else, and so most kittens are "naturally" housebroken. Typically, housebreaking a cat is more about teaching the cat where the litter box is than how to use it.

When you bring home a new cat or kitten, confine him in a small space or room with his litter box. You can set your kitten in the litter box and gently making scratching motions with his paw if you want, but usually this is unnecessary. After a few days, if he's using the litter box, you can gradually increase the number of new rooms that your cat can go to, always leaving him access to the litter box area.

A good rule of thumb is to provide one to two litter boxes per cat in a household. If your house is very large, or has multiple floors, you may need to provide multiple kitty bathrooms.

When people have problems with housebreaking cats, it's usually because they aren't cleaning the litter box enough or because the cat has found a new substrate that she prefers. Some cats enjoy using the dirt around plants, and others develop a liking for carpet or sheets of plastic. The easiest way to eliminate these problems is to eliminate access to the problem areas. Sometimes it's as easy as adding decorative stones to the base of a plant. If eliminating the inappropriate area isn't possible, try changing its context by putting food or bedding there.

Confining your cat to a small space with its litterbox should be enough to housebreak her.
Photo courtesy Hannah Harris

Litter box training a dog is complicated. Commercial dog litter is available, but since dogs have no innate desire to either bury their waste or look for a litter-like surface they have to be trained to use their litter box in the same way they'd need to learn to use any other kind of substrate.

Doggy litter manufacturers suggest that you keep your puppy in a large crate with bedding on one side and the litter box on the other to encourage him to use the box. This is counter to the basic idea of crate training, but in this case, the crate functions more like a very small room. Using a large open wire crate may help the dog feel comfortable using the litter box.

When handraising an orphaned puppy or kitten, you can simulate the action of the mother's tongue by gently cleaning the baby's genital area with a warm damp washcloth, which will allow him to relieve himself. Failure to do this can have serious consequences for the baby, who is otherwise unable to eliminate.