How to Choose a Dog

Now, most people think starting off with a puppy is the best choice, but that isn't necessarily so. Raising a puppy is a labor-intensive undertaking, and it may take as long as three years for him to fully mature. Do you have young children or a full-time job? You might discover an adult dog is a better idea. You see, the best way to make sure you and your dog get off to the right start is to match up the pooch and his needs to you and your lifestyle.

No two puppies are exactly alike. Oh, some purebred litter mates may look as identical as peas in a pod, but rest assured they'll have their own individual personalities. Even if a particular breed is known for a certain kind of temperament, that's just a general trait. Each puppy will develop according to his own personality, which will also be affected by how the pup is raised and what the parents are like. In other words, you can't judge a book by its cover...and you can't judge a puppy solely by its breed or looks. If this were the case, you could get the perfect dog by mail order. Instead, you've got to take your time and use your head -- and your heart -- to make sure the dog you bring into your home is a good match. Training a puppy is no picnic, and you should take all the precautions you can.

It's probably a good idea to start looking at puppies a few weeks before you're ready to take one home. Remember, this is a long-term relationship (lifelong, for the dog). If you find the perfect puppy on the first try, that's great, but most people have to kiss a few canine frogs before they find their four-legged Prince or Princess Charming. Don't let sudden infatuation make the decision for you: Take a good look at him or her for signs of physical problems. A clean bill of health at this early age is the good start you want to make sure your new friend stays with you for a good long time. Here are some clues to look for:

If you're an old softie, you'll probably want to take the runt of the litter home, complete with all his frailties. Be forewarned, though -- a sickly puppy is more likely to have major health problems into adulthood, and veterinary bills can add up quickly. If you're not sure you can take on the added expense of a more needy dog, don't. There are far more healthy puppies in the world than there are good homes for them, so you'll be doing any puppy a favor by adopting him. Evaluating a pup's personality is mostly a common sense call. There's a very good chance that a bright, friendly puppy will grow up to be a bright, friendly dog, and the timid pup cowering in the corner will continue to be shy. If you buy from a breeder, you have the right to expect the puppies to be well socialized and even accustomed to children, other pets in the household, and visitors to the home. The right amount of handling, exposure to a variety of sounds and scents, and the experience of life with humans, go a long way in setting your little pooch on the road to being a friendly, well-adjusted animal companion.This means your best bet on a purebred pup is the one who grows up in the breeder's home, smack in the middle of everything -- kids, vacuum cleaners, doorbells, and pots and pans clattering in the kitchen. Steer clear of breeders who raise their dogs primarily in cages and the so-called "puppy mills" that crank out dozens of litters each year that may go straight from a cage on the farm to a cage in a store. Cage-reared puppies often don't get enough handling or exposure to new situations, and eating, sleeping, and excreting in the same small area goes against their instincts. The result can be a shy, fearful, or otherwise poorly socialized dog.A puppy who is well socialized will play happily with other puppies but take equal pleasure in climbing into your lap for a pat and a cuddle. Once that happens, try turning the little guy over on his back and cradling him like a baby. If he fights you, you're looking at either one of the dominant puppies in the litter (the belly-up posture is a submission gesture) or one of the less trustful ones. If he doesn't mind being held this way, give him a tummy rub. If he's still not complaining, you're probably going to have more of a problem convincing him you should stop.The key is to look for the puppy who's interested in you, as well as the one you're interested in. And look more than once. Dogs can change their moods just like humans, so don't let first impressions force your decision; come back again once or twice (preferably at different times of the day), and see if the same puppies react the same way.Perhaps adopting an adult dog would be a better choice for you. We'll learn all the dos and don'ts in the next section.

When is a Puppy Ready for an Owner?

Puppies are born helpless. Their eyes and ears are closed, and their entire daily schedule consists of nursing and sleeping. By the age of about 14 days, their eyes and ears open, and they begin processing the world of light and sound.

At three to four weeks of age, pups start to learn the serious business of play. They're mobile now, and familiar signs of canine communication like tail wags, yips, and yelps accompany their interactions with mom, the world, and each other.

From this point until around 14 weeks is called the critical behavior period; this is when dogs form most of the foundation for their lifelong behavior. Contact with litter mates, mom, and -- in small doses -- humans is crucial during the critical period to ensure proper socialization. That's why the old practice of sending puppies to new homes by themselves at age seven or eight weeks has fallen out of favor. Between age two to three months seems to be the earliest a puppy is ready to start a new life with a loving family. 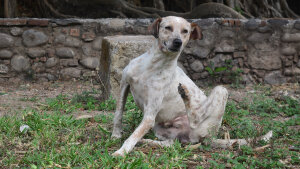 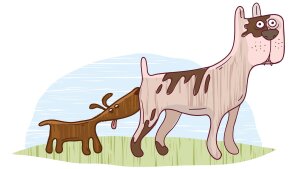