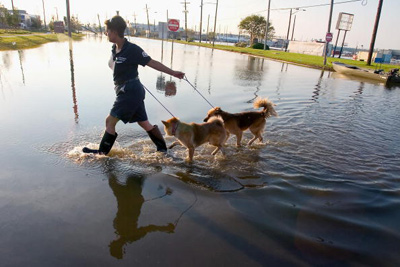 Racelle Carlson from the Arizona Humane Society leads two rescued dogs from a flooded neighborhood in New Orleans, La., to a processing area where the dogs will be examined, fed and evacuated to area shelters on September 6, 2005.
Melanie Stetson Freeman/The Christian Science Monitor via Getty Images

As we talked about in the last section, the HSUS has had many accomplishments over the years. In the 21st century, the organization has kept its momentum going. Here are two programs that have launched in the last few years:

Along with these new programs, the HSUS had some major achievements in 2007, in several areas of concern. To someone not well schooled in the animal cruelty trade, some of these areas may be surprising. These are some of the animal rights advances that took place because of HSUS programs and lobbying:

Humane Society International also persuaded the European Union to ban the trade of cat and dog fur and elephant ivory and continued to monitor seal hunts that take place in Canada.

The HSUS works diligently to improve the welfare of animals around the globe, but it can't possibly be everywhere all at once. For this reason, the Humane Society teams up with other animal-rights groups and services to accomplish its mission. In the next section, we'll take a look at the HSUS' relationship with those other groups.

The HSUS rewards people who strive to make a difference in the animal community through a number of awards. Some of the awards the Humane Society presents are: