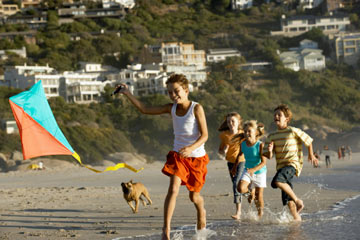 While kids seem to be more active when their families own a dog, that's just the beginning. Dogs provide children with a variety of health benefits.
Pixland/Thinkstock

Isn't there anything a dog can't do? Fido can scare away intruders, fetch the morning paper, find his owner a date (so we've been told) or if you're really lucky, open the refrigerator door and bring back a cold beer [source: YouTube]. While a beer-fetching dog might be a welcomed addition to any household, dogs seem to have a higher calling: They can make a human's life much healthier, especially overweight or inactive children.

We all know that dogs love to play and they love to walk, and any veterinarian can wax eloquent about how important exercise is to the health of a dog. What about humans? Specifically children? Does walking and playing with a dog correlate into a more active, and as a result, healthier child?

While there have been several studies in recent years linking pet dogs to increased physical activity in children, cause and effect has yet to be proven. So does owning a dog make a child more active, or do active families own dogs [source: Russell]?

Regardless, several studies suggest that kids who come from dog-owning families are more active than children who don't live with a dog. The studies are more important than ever because the amount of time children spend exercising is pitifully low. According to the National Institute of Child Health and Human Development, which is part of the National Institutes of Health (NIH), less than a third of 15-year-olds get an hour of moderate to vigorous exercise a day, the minimum amount that the federal government recommends [source: Hellmich].

According to one NIH study, 9-year-olds spend an average of three hours a day in moderate to vigorous exercise, while 15-year-olds spend 49 minutes being physically active on the weekdays and 35 minutes on weekend days. Boys are generally more active than girls [source: Hellmich].

Such inactivity is a blueprint for a disaster. According to the Centers for Disease Control and Prevention, about 17 percent of children aged 2 to 19 are obese, meaning their body mass index is at or above the 95th percentile for children of the same age and sex. That's 12.5 million obese kids, in case you're counting [source: Centers for Disease Control and Prevention]. In addition to being overweight, obese kids often suffer from asthma, sleep apnea, high blood pressure and high cholesterol. Scientists have also linked depression, joint problems and diabetes with obesity [source: Kids Health].

So we ask the question again: Can dogs really make children more active, and as a result, healthier? Go to the next page to find out. 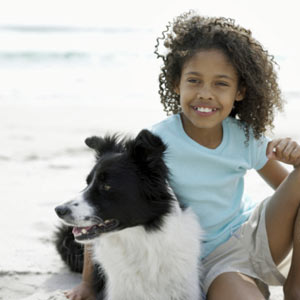