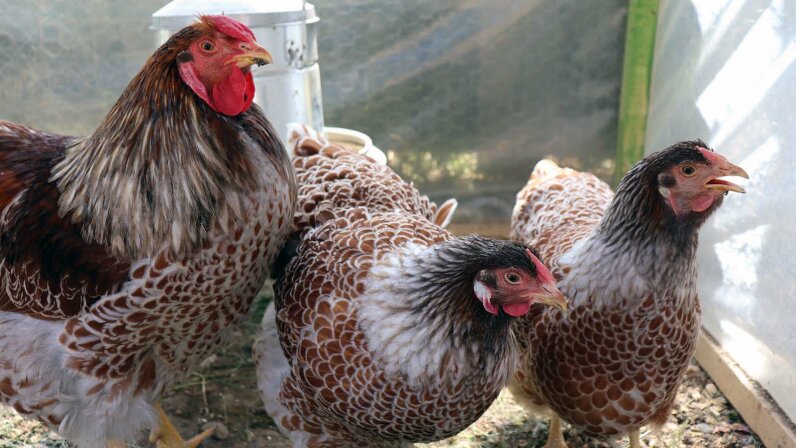 There are more than 500 breeds of chickens, but a few are known for their prolific egg production and good temperaments, like these Wyandotte. HarikalarDiyari/Pixabay

Most of us probably learned in preschool that chickens live on farms. But child development stages are about to hit the fan, because today's chickens don't always live on farms; they live in backyards. And raising these "backyard" chickens is growing more and more popular.

The obvious question is, why?

A lot of people with chickens say they have them for the eggs, which are fresher, tastier and prettier than the eggs you buy in the grocery store. Depending on the breed of chicken, the eggs they lay come in many shades of blue and green, in addition to white and brown.

Raising chickens also is a great way to teach children about nature and responsibility. Plus, chickens are surprisingly social creatures with their own personalities. But before you get too excited about having your own brood of hens, make sure you are even allowed to have them. Nothing is scarier than an angry neighborhood association. If it's a go, here's what you need to know.

The first thing you need for backyard chickens is a safe and secure chicken coop.
Wikimedia/(CC BY-SA 2.0)

What Do Chickens Need?

As with most pets, there is a time and money commitment. Chickens need attention at least twice a day. They need a house — or coop (more on that in a second) — to stay safe from predators. They need to be let out of their coops in the morning and evening. Chickens also need access to fresh water and food. And of course that poop isn't going to scoop itself.

Now about the chicken coop. You need a coop to protect your chickens from weather and predators. There are many coop designs, but a good basic coop includes four walls, a weather-proof roof, good ventilation, nesting boxes and roosts/perches. According to the University of Missouri Extension, a medium-size chicken needs at least 3 square feet (0.28 square meters) of floor space and should be tall enough for you to stand comfortably and gather eggs and shovel manure.

You also can have a contained area attached to the coop called a "run," which will give your chickens space to exercise and enjoy fresh air, though some people prefer to "free range" their chickens so they can meander outside their coop unrestrained. The chickens are all for this, but it puts them at a higher risk of an untimely meeting with predators like fox, coyotes, opossums, weasels, owls and raccoons (and even cats and dogs).

A coop also needs "nesting boxes," which are small containers filled with soft bedding for the hens to lay their eggs in. Plan for no less than one box per three-to-four chickens. Nesting boxes should be at least 18 inches (0.46 meters) off the ground, but not as high as a roost, which is a bar where the chickens perch and sleep. Roosts should be higher than nests because chickens like to sleep as high up as possible.

Chickens love chicken scratch, which is a mix of cracked or rolled corn, oats, barley, wheat and seeds.
Wikimedia/(CC BY-SA 4.0)

Keeping Your Chickens Fed and Warm

Chickens are pretty hardy and can survive in their coops even when temperatures drop into the single digits, but you should still insulate it if you live in cold climates. Heat lamps are popular, but they can be a fire hazard. Safer options include ceramic heat bulbs (usually used for reptiles), heat plates and chick brooders. However, pine shavings, regular feather dusters and other chickens are usually enough to keep chickens warm.

Endless materials are used on coop floors to collect waste and decrease odor, but they all have drawbacks. Some are flammable, others can cause respiratory problems, encourage bugs or promote disease. Most chicken experts consider straw, pine straw, pine chips and sand to be the best bedding options. No matter what you use, there will be maintenance. Unfortunately, there's no Roomba for chicken coops.

Yes, you have to feed chickens. Expect a 6-pound (2.7-kilogram) chicken to eat anywhere from 1.5 to 3 pounds (0.68 to 1.3 kilograms) of food per week. It's best to buy a nutritionally balanced prepared feed; you can find it online or at most pet stores. Chickens will supplement their diets with the bugs, worms and weeds they find when exploring outside. They also love fruit and vegetable scraps and "chicken scratch," which is a mix of cracked or rolled corn, oats, barley, wheat and seeds. Scraps and chicken scratch should be limited because they don't provide all the nutrients chickens need.

It's extremely difficult to tell the sex of baby chicks unless you have a lot of experience.
Wikimedia/(CC BY-SA 4.0)

Finally, the fun part — the chickens! You want a mixture of three to six chickens to keep a steady supply of eggs. There is no shortage of places to buy chicks, including from local hatcheries and online hatcheries, which have the advantage of a wide variety of breeds. There are too many breeds (more than 500) to mention here, but a few that are known for their prolific egg production and good temperaments are Rhode Island Reds, Wyandotte, Barred Rocks, Buff Orpingtons and Ameraucana.

"The Chicken Man" (yes, that's his name) in Hendersonville, North Carolina, sells 22 breeds of chickens as "pullets," when they are about 8 weeks old and no longer considered chicks, but not yet adults. "When you buy pullets you don't have to wait as long for eggs," he explains. "Most people ask me to pick out a variety of breeds for them, it's more interesting." He says he started his business during a midlife crisis.

Hens start laying eggs when they are around 6 months old and continue for anywhere between five and 10 years, with the first two years being the most productive. They can live well past their egg-producing years, to age 10 or more. "They CAN live that long, but between diseases and predators they usually don't," The Chicken Man says.

Roosters Are a No-no

If you have no desire to start a hatchery, listen to loud crowing or deal with a territorial chicken, then you don't want a cockerel (roosters that are less than a year old).

Asheville, North Carolina, city planner and chicken owner, Paul D'Angelo and his husband Matt, ended up with a rooster and had to give it to a farmer when the crowing became too disruptive. "He was also starting to get a little mean and territorial," D'Angelo says. "He didn't want anyone in his space, which included our yard. That was a problem."

The issue is it's hard to avoid getting a rooster because it's nearly impossible for most people to determine the sex of a chick when they are very young. Hatchery owners are about 90 percent accurate when "sexing" chicks, but their methods require a lot of experience. But you can't be sure until your chicken is between 12 and 30 weeks old, and it either crows or lays an egg.

As they mature, roosters grow brighter feathers and bigger and brighter combs and "wattles," which is that fleshy skin that hangs down from the rooster's chin. Maybe the term "cocky" is just referring to some really obnoxious roosters.

A Chinese delicacy called the "century egg" (also known as the 100-year egg, the thousand-year egg and the millennium egg), is made by curing chicken, quail or duck eggs in a pot of strong black tea, sodium, baking soda, lime and fresh ash for 100 days (not years, as the name implies). Those who eat them will first encounter a strong, putrid ammonia smell and then a brown egg "white," with a jello-like consistency and a hard gray-green yolk patterned with fungi. A century egg has a sharp, astringent taste. Yum.