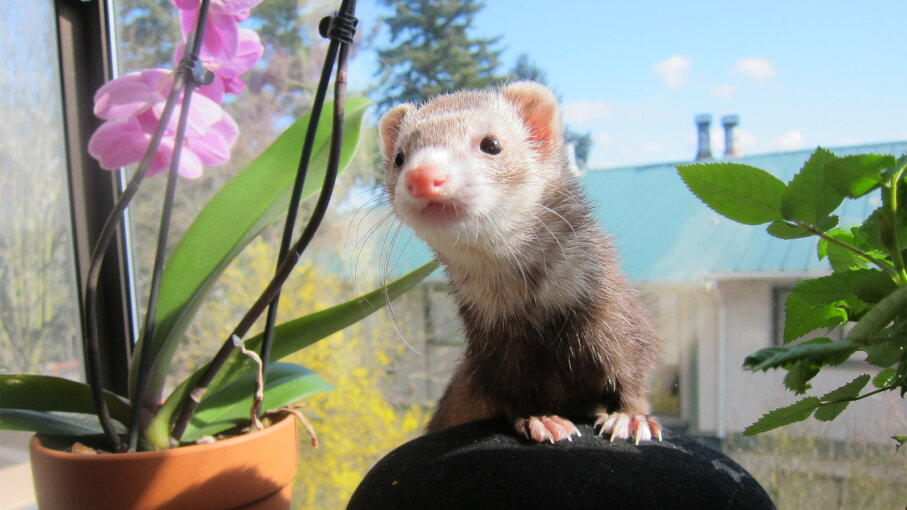 Ferrets are affectionate, playful and a heck of a lot of fun, but they love to explore their surroundings and need a lot of supervision. Roy Maloon/Flickr (CC By 2.0)

But as an adult, you can have pets galore! The only catch is that now the buck stops with you. So before walking off the dog-beaten path to the world of exotic pets, do some research. A little research has saved many a pot-bellied pig from city living.

Although many people mistakenly think they are rodents (ferrets, by the way, find this offensive), ferrets are actually domesticated cousins of European pole cats and are members of the weasel family. You can get a ferret from a pet store, breeder or a shelter. They usually cost from around $40 at a shelter to between $100 and $150 at a pet store, and more if you buy directly from a breeder. Male ferrets (hobs) are generally larger than females (jills), but both are small. Most ferrets weigh between 1 and 5 pounds (2 kilograms) and are 13 to 16 inches (33 to 40 centimeters) long. Males can grow larger if they are not neutered.

Ferrets Do Emit an Odor

In the "Get a Pet Ferret — Cons" column, is definitely their musky odor. People with a heightened olfactory sense probably shouldn't be ferret owners, although neutering and spaying usually tones down the scent.

Most ferrets have a life span of between 5 and 8 years, but Kleinert notes that many live 10 years or more with good care. "Ferrets need the standard vaccinations (rabies and canine distemper, which is fatal to ferrets), heart worm prevention medication and annual checkups to keep them healthy, just like any pet," she says.

Ferret fans love their spunky, playful and friendly personalities. "They are also extremely loyal to their owners," notes Kleinert. Ferrets are known to be affectionate and very smart, which they demonstrate by being leash and litter trainable. "Intelligence" goes in the "Get a Pet Ferret — Pros" column for sure.

If you're worried about getting enough sleep with a ferret in the house, don't be. They are quiet animals (except when hurt or very frightened) and sleep about 18 hours a day. They're not nocturnal unless their owners are; they adjust their sleep schedules to match their owners' circadian cycles. Yep, put "considerate" in the "Get a Pet Ferret — Pros" column.

"High maintenance," though, is an undeniable factor to consider. Like a mini Houdini, a ferret will disappear in a flash. They are very mischievous and like to slip between or under things and hide, so it's a good idea to ferret-proof the house. To get an ample amount of exercise and brain stimulation, ferrets need several hours a day of supervised time outside of a cage. This is where the ferret-proofing comes in. Doors should be kept closed, cabinets inaccessible and small spaces (including under and behind refrigerators and washing machines) blocked.

Anything small — or that you care about — such as socks, shoes, keys and cords should be put away. Ferrets will chew, burrow, dig, hoard and hide little pieces of anything they find. ("Ferret" is most likely derived from the Latin word furonem meaning "thief.") They love to chew everything, especially anything rubber or foam. This can be dangerous because pieces that are swallowed can cause intestinal obstruction.

As social critters, ferrets enjoy and need interaction with their owners and, ideally, with ferret friends. In other words, if you are getting one ferret, you might as well get two.

Your Ferret Will Need Some Stuff

When ferrets aren't enjoying supervised free time, they should be kept in a cage to keep them safe and prevent damage from their mischievous behavior. A multilevel cage (each level should have food, water and a litter "box") is best if you own more than one ferret. Other basic needs include quality ferret food, which can be found in pet stores, water (obviously), a pet carrier, toys, and a hammock or sleeping bag (not obvious) for those 18 hours of sleep.

Ferrets need to live indoors, as they are prone to heat stroke, have very poor vision and are fearless. Experts also advise against having ferrets in a home with young children (the nibbling), cats and dogs. Even friendly animals can easily hurt a ferret when they're playing.

Even with all their good characteristics, ferrets get a bad rap because some local and state governments ban ferrets as pets. The reasons for banning them, however, are generally based on misinformation. Typically locals fear that pet ferrets will escape and form wild populations that either will upset natural ecosystems or spread rabies, but that's impossible. Unlike cats and dogs, there are no wild ferrets because they can't survive in the wild. And rabies is very rare in ferrets; in fact there has never been a case of a ferret transmitting rabies to a human.

Most states allow ferrets as pets, but you should check with your state and local government before buying one.

Now that you've ferreted out the facts (you knew that was coming), you can become a ferret owner without any unpleasant surprises. The bottom line is, if you have enough time, energy and patience to invest in a pet ferret, owning one can be very rewarding. Their affection, loyalty, playfulness and intelligence can provide years of fun and companionship.

Now That's Interesting
When a female ferret goes into heat, she stays in heat indefinitely or until she breeds. If breeding doesn't occur and she remains in heat, the high doses of estrogen can cause aplastic anemia, which may lead to death.