Getting a Pet Rabbit? 4 Things to Know First

Browse the article Getting a Pet Rabbit? 4 Things to Know First 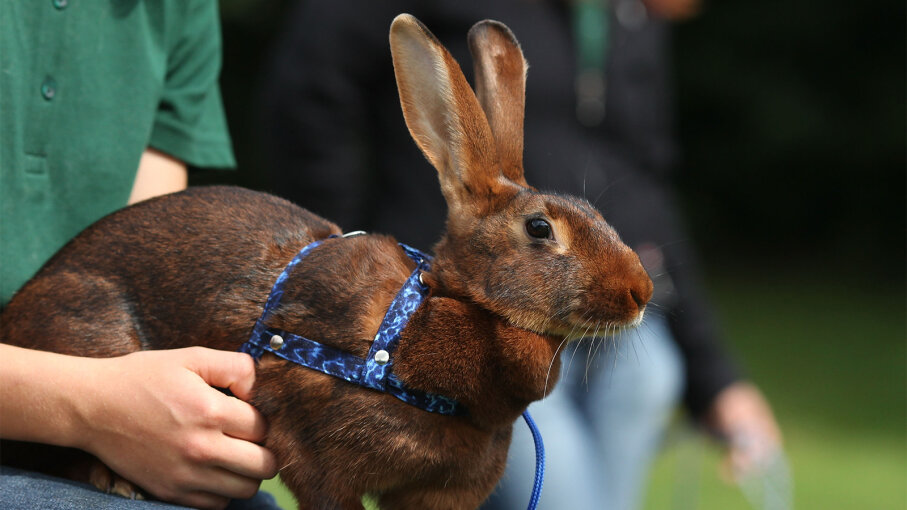 Rabbits are cute and cuddly, but they require veterinary care just as a dog or cat does. Ralph Orlowski/Getty Images

Imagine having a pet bunny to snuggle on the couch while you watch Netflix, or maybe to hop around in your yard, posing for the cameras with your children on Easter morning. All that sounds pretty adorable, if you're into that kind of thing. And yet, like any pet, rabbits are also a much bigger commitment than you might realize. So, what do you need to know before picking up a rabbit and commencing couch snuggling?

First, let's get one obvious but often overlooked fact out of the way: Like a kitten or puppy, the baby bunny you pick up at the pet store is going to turn into a full grown rabbit, which might live somewhere between 7 and 10 years, or even to 14 with the right diet. They have the reputation for being a little dull-witted and passive, but that's simply not the case — they're smart and curious, crafty and sometimes even aggressive or destructive.

Here are four things you need to know before getting a pet rabbit:

"Rabbits have the same digestive process as horses, meaning their diet needs to consist of plenty of fresh hay," says Sydney Brehm, a veterinarian at Sweetwater Creek Animal Hospital in Lithia Springs, Georgia.

Like horses, tapirs and rhinoceroses, rabbits are "hindgut fermenters," which means all their digestion fermentation happens in the large intestine, making them highly sensitive to changes in diet. Beyond hay, you can give your rabbit high-quality, high-fiber pellet food, but not too much, as they are prone to obesity. They also like dark leafy greens and root vegetables as a treat. They obviously require fresh water at all times, and though your rabbit would probably love to munch on sugar cubes, they're not good for rabbits or horses, so please refrain from giving them stuff like that.

Rabbits love company — because they're so smart, they can easily learn tricks and can be trained to use a litterbox. They like spending time with their humans and usually like other rabbits, so it's not a bad idea to keep them housed in pairs. Although every rabbit is different and some might have no desire whatsoever to share a cage, a neutered male and a spayed female generally do very well together.

They also normally do just fine with very calm, mannerly dogs and cats, although it's important to remember they are very sensitive to noise; loud animals like talkative birds or constantly barking dogs can really stress them out. Interactions between your pet rabbit and a pet of a different species should always be monitored.

3. Rabbits Get Hairballs and Their Teeth Grow Constantly

"It is vitally important to provide enough fiber in your pet rabbit's diet to prevent some of the most common problems rabbits develop: teeth overgrowth and trichobezoars, or hairballs," says Brehm. "A rabbit's teeth continually grow throughout its life, and having a diet that consists of at least 90 percent fiber will help a rabbit keep its teeth trimmed."

Rabbits are also fastidious about grooming, much like cats. Hairballs form from grooming, but unlike a cat, rabbits can't throw up, so if a large hairball gets stuck in their digestive system, it can lead to something called gut stasis, which happens when their intestines get clogged like a bathroom drain. Lots of fiber will help keep the digestive system moving and decrease the likelihood of a hairball getting caught.

4. Rabbits Are Prone to Certain Diseases

While veterinarians in the United States most often eschew vaccinations for bunnies (they're not prone to rabies or distemper like your dog or cat), rabbits in other parts of the world — Europe, for instance — require yearly vaccinations to protect against three deadly and painful rabbit diseases: myxomatosis and two different strains of Rabbit (Viral) Haemorrhagic Disease (R(V)HD). Whether your rabbit requires vaccinations or not, yearly veterinary care is important because rabbits can develop diseases and parasites just like other animals.

For starters, rabbits have an astronomically high incidence of uterine cancer — something like 80 percent of females will develop the disease in the first six years of life, so it's important to get your female bunny spayed after 6 months old.

There are also a few diseases rabbits can transmit to humans. One of the most common is a bacteria called Pasteurella multocida, which rabbits (and dogs and cats, too, for that matter) may carry in their upper respiratory tract and transmit to you via a bite or scratch. In rabbits, it causes respiratory infections and may lead to abscess formation, so it's worth monitoring your rabbit for the sniffles.

"A parasite called Encephalitozoon cuniculi may cause sudden neurologic signs, and can be spread from mother to offspring," says Brehm. "People with compromised immune systems would be the most susceptible to catching a disease from an infected rabbit."

Pet rabbits are legal in most parts of the world — certainly in all the states in the U.S. Easier to keep than most exotics, bunnies need to be kept cool and taken out of their enclosure regularly to hop around and climb — so rabbit-proof your house! They're fond of chewing cords and carpet, so be sure to keep an eye on your bunny while you're snuggling on the sofa watching Netflix with him.

Learn more about having a rabbit as a pet in "The Bunny Lover's Complete Guide To House Rabbits: The Ultimate Handbook for Successfully Living Indoors with a Pet Rabbit" by The Bunny Guy. HowStuffWorks picks related titles based on books we think you'll like. Should you choose to buy one, we'll receive a portion of the sale.

Now That's Interesting
There are around 50 recognized breeds of rabbits.