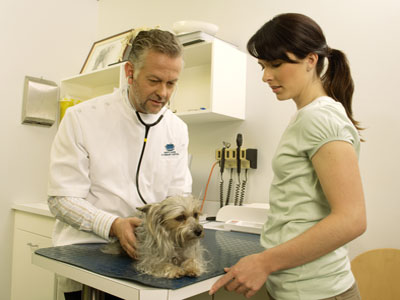 Vaccinating your dog against Bordetella is only required in certain circumstances. Check out these dog pictures.
Dean Golja/Getty Images

­Pay a visit to any pet store or veterinarian's office and you'll see it's clear people really love their pets -- and they aren't shy about showing that love financially. Doggie ­day care, luxury grooming services, pet portraits, manicures, massage, pet psychics and psychologists -- you name it. If there's an angle in the pet care industry that hasn't been covered at this point, start doing it yourself and you'll be swimming in money before you know it.

The National Pet Owners Survey claims that in 2007, 63 percent of all households in the United States had at least one pet -- that's more than 70 million homes. Not surprisingly, dogs and cats lead the charge. There are 74 million dogs in 44 million homes. There are even more cats -- 88 million of them -- but in a fewer number of houses -- 38 million. (Crazy cat lady, we're looking in your direction.) The total pet care industry yielded a whopping $41 billion in 2007, and projections for 2008 are a couple of billion more than that. The most money was spent on food, at $16 billion, but veterinary care was a close second at $10.1 billion.

­If these numbers are startling, they shouldn't be. Pets are like family members to many people, and what parent wouldn't spend whatever money they needed to keep his or her child happy and healthy? And like kids, there are a variety of things that can happen to your pet to merit a trip to the doctor. The $10.1 billion that Americans spend each year goes toward everything from checkups to emergency surgeries. One part of the grand total comes from your pet's ­immunizations. Any responsible pet owner gets the basics for his or her dog or cat. These are known as the core vaccines. For dogs, this includes shots for parvo, distemper, hepatitis and rabies. Cats generally get shots for distemper, leukemia, rabies and the viral diseases rhinotracheitis and calicivirus.

There's growing concern that some pets are over-vaccinated, so it's up to the pet owner to do the research, speak with the veterinarian and determine which shots the pet needs. There's also a vaccination for a bacterial illness called Bordetella that protects your pet from something called kennel cough. We'll explain exactly what Bordetella is and whether your pet may need the shot on the following pages. 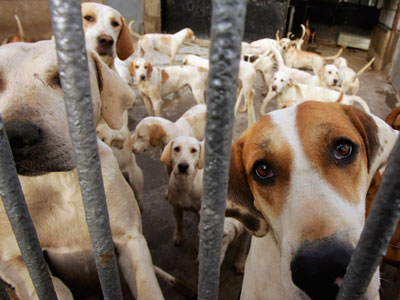 Conditions like this are likely to be swimming in Bordetella bacteria.
Scott Barbour/Getty Images

­Kennel cough, also known by its scientific name, Bordetella bronchiseptica, is a bacterial illness. Your dog is most likely to catch kennel cough when it spends extended periods of time in close quarters with other dogs. Poorly ventilated facilities also increase the chances a dog will acquire the illness. Boarding facilities and veterinarian offices are a couple of common places your dog might pick up kennel cough. Because of thi­s, boarding services require a Bordetella vaccination before your pooch can spend the night. You'll also need one if your dog needs to stay overnight at a vet office.

Like humans, a dog's respiratory system has built-in protection against invading infectious agents. One of these is called the mucociliary escalator. The cells of the respiratory tract have little hair-like structures poking out from them called cilia. This turns each cell into a little scrubby pad that moves debris that gets trapped in the mucous layer to the throat where it can be coughed up and expelled. When the escalator breaks down, the infection in the debris can make its way down the throat, through the airway and into the lungs. Things like stress, heavy dust, poor ventilation, cold temperatures and cigarette smoke can damage the mucociliary escalator.

So if your dog is stressed out and gets boarded in a crowded and dusty kennel, it could acquire kennel cough if it isn't vaccinated. The illness is characterized by a harsh and hacking cough. It sometimes sounds like the dog has something caught in its throat. Think of it like a canine common chest cold. Your dog may not appear sick otherwise, so if you don't notice a decrease in activity or appetite it doesn't mean you're in the clear.

The organisms of the Bordetella bronchiseptica can actually attach themselves directly to the cilia of your dog's respiratory cells, paralyzing them. They also have a knack for knocking the immune cells out of commission that would normally fight the bacteria. Bordetella can also be accompanied by some other common viruses, making it a more complex infection.

The incubation period, or the time it takes for your dog to show symptoms after exposure to kennel cough, is between two and 14 days. This means that it can take up to two weeks after your dog picks up the bacteria before you realize it. Because of this, many dog owners may do a little self-misdiagnosis. While dogs are the most common victims of Bordetella, it can also occur in cats, rabbits, pigs and guinea pigs. It may be possible for people to acquire the human version, whooping cough, but it's generally believed to be noncontagious to humans. Dogs get rid of the Bordetella organisms for about three months, and it's pretty contagious among other dogs.

The good news about kennel cough is that it usually just goes away, much like a human cold, in about four to 10 days. Some more serious bouts of the illness can last up to three weeks. Antibiotics are usually prescribed, but it's unclear exactly how effective they are. Cough suppressants to provide your dog with some temporary relief are also a possible treatment. Even though kennel cough is rarely a serious illness, puppies can be more vulnerable than older dogs to the risk of pneumonia. 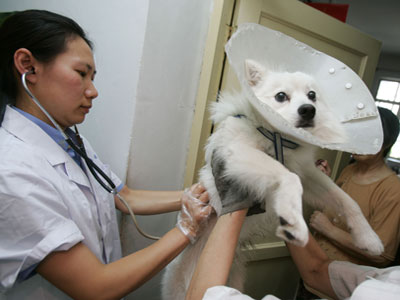 Most dogs probably prefer the nasal version of the Bordetella vaccine to the sting of the needle.
China Photos/Getty Images

­One way you can help your dog, cat, guinea pig, rabbit or pig avoid kennel cough is by immunizing with the Bordetella vaccine. All vets recommend or require the vaccine, typically five days before your pet stays overnight in a facility. The vaccine is supposed to last up to six months, but is only effective in about 70 percen­t of dogs. So just because your dog has been vaccinated, it can still acquire kennel cough.

Like all vaccines, Bordetella works by injecting a small amount of the bacteria or virus into the bloodstream of the animal. The vaccine can contain one of two things, a living, non-harmful strain of the bacteria or virus that you're safeguarding against or a nonliving, inactive version that can replicate itself in the body. This version is called a killed vaccine. Live vaccines are generally thought to be more effective than killed ones, so the nonliving variety have additives called adjuvants that help to increase their effectiveness.

The idea of a vaccine is that it introduces the body to a virus or bacteria so that the immune system can recognize it and fight against it in the future. If your body has never been exposed to a viral or bacterial agent, it won't understand the best way to fight it. Think of it as a "know your enemy" kind of approach to fighting disease and illness. Once the body finds a new agent to fight, it begins to produce antibodies, a human or animal's "weapon" against virus and bacteria.

There are a couple of options for getting your pet vaccinated. It can either get a shot or a nasal treatment. Your puppy can't get the injectable variety until it's four months old and usually gets booster shots annually. The nasal vaccine can be given to puppies as young as three weeks old. The advantage of the nasal vaccine is that the nose is where most dogs will pick up the disease. There's debate among veterinarians as to which vaccine provides the best protection against kennel cough.

Because kennel cough is typically not life threatening, there is some dispute about whether vets and boarding facilities should require it. Some vets recommend that your dog receive an annual booster while others maintain that if you don't board your dog, then it's not really necessary. New protocols are being initiated in the veterinary community because of criticism of over-vaccinating pets. All vaccines carry a risk of allergic reaction, so talk to your vet about your pet's lifestyle to determine the benefit-risk ratio. If your dog won't be going to a grooming facility, pet show or overnight boarding house, then it may not be worth the risk or expense to get it boosted.