What is kennel cough?

Browse the article What is kennel cough? 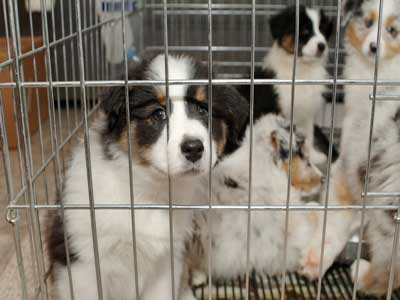 ­Whenever cold and flu season kicks off in ­the fall and winter, sickness can spread through schools and daycare centers like a fire in a drought-stricken forest. All it takes is a spark -- one sniffling child who sneezes, coughs and effectively launches bacteria and viruses into the air for others to inhale -- to start a mini epidemic. Something similar happens at dog kennels, grooming facilities and pet stores, where multiple dogs reside in close quarters. Those confined environments with increased dog-to-dog contact and less circulated air are prime real estate for an upper-respiratory infection called kennel cough.

Like the common cold in humans, kennel cough spreads quickly among groups of dogs. The illness is a type of bronchitis called infectious tracheobronchitis that occurs most frequently in dogs and is characterized by a hacking cough. Although a dog with kennel cough may have a diminished appetite and run a low fever, the dog usually recovers in a couple of weeks.

­Kennel cough is caused primarily by the bacteria bordetella bronchiseptica. In addition, canine adenoviruses Type 1 and Type 2 may accompany the bordetella. The reason that kennel cough passes so easily among dogs is that these infectious particles are airborne. When a sick dog begins coughing, that action spews the bacteria and viruses into the air. Moisture, dust and mold particles then transport the bacteria and virus, and another pooch unwittingly inhales them. Once inside the body, the bordetella cells irritate the mucociliary escalator in a dog's respiratory tract. The mucociliary escalator refers to t­he hairlike cilia cells coated in mucus that trap infectious particles before they enter the lungs and prompt coughing or swallowing. When the bacteria and virus enter that area, they irritate and damage those mucous and respiratory tract cells.

If you pick up your beloved dog from a boarding shelter after a vacation, it's undoubtedly disturbing to discover that he or she has caught this form of bronchitis. Fortunately, kennel cough's bark is louder than its bite. 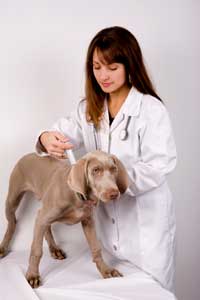 ­If you leave a dog at a boarding shelter for a long weekend, you probably won't notice any signs of kennel cough until after you bring it back home. Once a dog inhales the infectious bacteria, it generally takes a week to 10 days for your pet to show symptoms. In a routine case, a dog with kennel cough will exhibit the telltale hacking and sneezing that may produce a whitish substance. Although the harsh cough may sound painful for your pooch, it's the body's way of getting rid of the bordetella bacteria. Aside from that, most dogs with kennel cough act normally.

It takes around two weeks for kennel cough to run its course. To ease the recovery period, your veterinarian can prescribe antibiotics and cough suppressants to relieve the symptoms. If you have a healthy, younger dog, a trip to the vet isn't absolutely necessary. However, young puppies and older dogs with previous health problems should get a checkup to be safe. In severe cases, kennel cough can spiral into pneumonia, which certainly demands a trip to the doctor. Signs of that happening include green or yellow nasal discharge, high fever, diminished appetite and breathing problems.

Although any dog can come down with a case of kennel cough, certain breeds are more susceptible to it than others. For instance, some flat-faced dogs, such as bulldogs and pugs, have elongated palates. That excess soft tissue at the back of their mouths partially blocks the dogs' breathing passages, which makes it more difficult to cough. When dogs with elongated palates catch kennel cough, their bodies have a harder time expelling the phlegm. Young puppies and older, weaker dogs have a higher tendency to develop the sickness as well.

Owners who regularly board or show their dogs might consider kennel coug­h vaccination. Dogs as young as two weeks old can receive the treatment via injection or through their noses, and it lasts for 10 to 12 months [source: Dog World]. But don't take Fido in for immunization a day before boarding him and expect the dog to be adequately protected: It takes about four days for kennel cough vaccine to build an immune response [source: Dog World]. Also, vaccinate only healthy pups; it won't do any good to vaccinate dogs that already have kennel cough.

In case you're concerned about your dog catching kennel cough while being boarded or groomed, do your homework before choosing a sitter. Talk to other dog owners and find out where they board their pets. Check out the facility's cleanliness and the handlers' credentials. Or select a location that boards only a small number of animals at once. As a precaution, many kennels require prospective canine residents to have proof of bordetella immunization.

After that, if your dog catches kennel cough, remember that it's rarely life-threatening. Like treating a child with a cold, you should monitor the dog's symptoms and behavior for anything abnormal. And when in doubt, call the vet.

Kennel Cough in Other Species