Browse the article When Car Sharing and Pets Converge 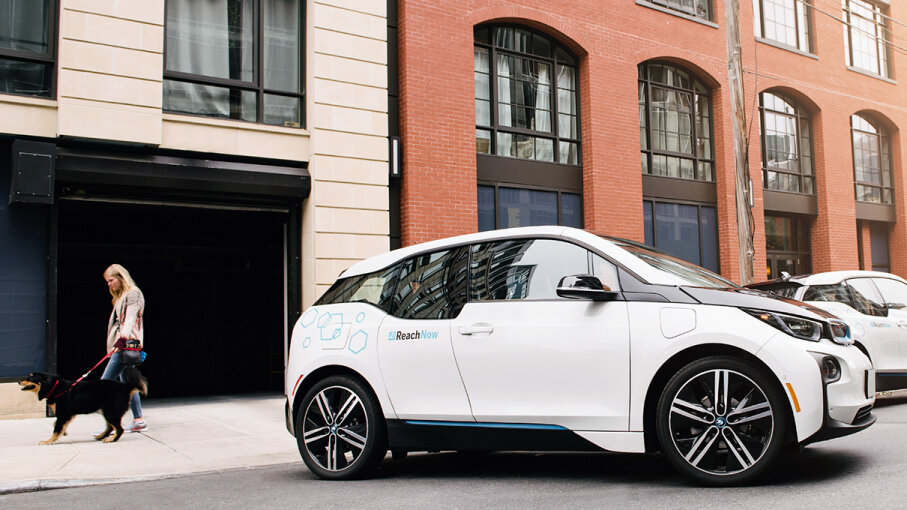 ReachNow car share service allows members to bring pets along, as long as they are crated while inside the vehicle. ReachNow

When you think of early adopters, you might think of someone who's had a car2go car sharing membership since Day 1, and probably a Zipcar membership before that. But an early adopter could also be that person you know who's been involved in rescuing puppies and kittens, well, before rescue was the thing. And in the Venn diagram of these two groups — early adopters or not — there's certainly a lot of overlap.

And that brings us to the question: Is it OK to take your pet(s) in a shared car?

In most cases, the answer is yes. "We do have a pet policy for all members," says James Emery, the general manager of car2go in Austin, Texas, and adopter of a 70-pound blue heeler mix. Emery says car2go wants both drivers and pets to be safe, so they do recommend pets be kept in carriers when they're in cars.

It's the same story at ReachNow car sharing in Seattle. "We're open to pets being part of the lifestyle our members have," says Laura Gonia of ReachNow. "We believe there's a world where people are owning fewer cars in busier urban environments. They're taking all the same trips, running all the same errands. How can we enable members to live that lifestyle? That's why we allow pets in the cars."

Car Sharing Is the Cat's Meow

This is the exact situation that Dehlia McCobb finds herself in. She lives in Portland, Oregon, which is easily bikeable, has a robust public transportation system, and has several car sharing and ride hailing companies operating in the city — and she uses all of them. She also has several longtime cat companions, and sometimes those cats need to go to the vet or to boarding. McCobb says she's used both Portland's buses and Zipcar to get her cats where they need to go.

"My cats have never made a mess in a car," McCobb says. She puts the carrier in the passenger seat, and the cats are usually pretty happy to watch the scenery go by out the window. She found she can take the calmer of her cats on the city bus in a carrier, but not her more anxious cat. "It would distress her," McCobb says. "It's better to take her by car."

Do Unto Other ... Drivers

There's a level of courtesy involved in taking your pet along while you run errands in a shared car. Both ReachNow and car2go emphasize the golden rule as it applies to the shared economy: Do unto other drivers as you would have done unto you. If there's pet hair in the car, brush or vacuum it out before you return the car.

ReachNow's Gonia says it's not totally unusual to find pet hair in cars. If there's a lot of dog hair, however, the driver will be assessed a cleaning fee, but it would have to be a real mess.

"A lot of times, it's as simple as educating [the member] about the rules," car2go's Emery says. "Detailing fees are for more egregious acts than just some fur on the seats."

McCobb says as a user that takes her pets along, the rules are pretty straightforward. "You use it like a car of your own as far as pets are concerned," she says. "But you have be to a little more vigilant to leave it as you found it."

And it seems most of the car sharing companies are even OK if your pet is, well, full-sized. Car2go, for instance, is swapping out its entire fleet of Smart fortwos for full-sized Mercedes-Benz models in select cities. ReachNow's fleet includes all BMW vehicles. Most of these have plenty of space for large, well-behaved dogs in the rear.

"If you can isolate one of the Mercedes-Benz GLA models," Emery says, "there should be more than enough room for a large dog carrier in the cargo area. You can even fold down the seats if need be."

Car sharing services are thinking about how to better serve all of their members in the future as the sharing economy model grows. ReachNow has grown to about 75,000 members in three cities within 18 months, and it's looking at how to reach even more potential users. "Do we need to have car seat options? Ski rack or bike rack options? Those are things we don't have right now," says Gonia.

Car2go has been on the car sharing scene for nearly a decade. It just passed the million-member mark in North America, and it has 3 million members globally. "New, emerging sharing economies are coming forward," Emery notes. "Even the dog sitting app I use. That's the way our world is shifting; it's more about sharing than owning."

Now That's Cool
The exception to any of these rules is when a member or passenger with a disability has a service animal. Service animals can ride in shared cars without being in a carrier so they can do their jobs. Zipcar in particular just asks that those with service animals let the company know so they can send someone to clean the car for the next user.