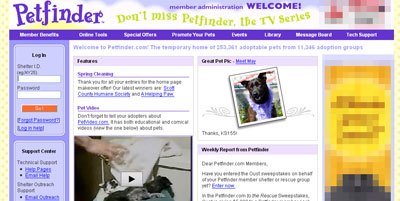 A typical user spends about 13 minutes browsing Petfinder in one session and looks at around 20 pages. There are currently more than 262,200 animals listed on Petfinder, mostly dogs and cats. Many shelters report that over half their adoptions come from Petfinder and that their euthanasia rates have dropped substantially since they began using the site. Since its inception, Petfinder has been behind the placement of more than 12 million animals.

More than 11,440 groups have listings on Petfinder, and over 1 million animals were adopted through the site in the past year. Petfinder has members in all 50 states and the District of Columbia, Canada, Mexico, the Bahamas, Costa Rica, Puerto Rico, St. Martin, Jamaica, Guam and the Virgin Islands. Petfinder receives more than 4.6 million site visitors and more than180 million page views each month.

All of this traffic is routed through more than 50 servers located in Secaucus, N.J., all maintained by a single systems administrator. Currently Petfinder has four major sponsors, whose contributions pay for staffing, servers, and outreach in exchange for advertising space and promotions at conferences. Petfinder also raises money by selling space on their site to advertisers.Getting a Petfinder site is free, but in order to create one, a group either must be a municipal animal shelter or submit documentation proving their non-profit status and a veterinarian reference or, if they do not have official nonprofit status, a copy of their adoption contract and a veterinarian reference. People selling animals for profit may not use Petfinder. However, a group does not need to have official nonprofit status in order to get a site.

The groups on Petfinder are sometimes as different as the pets they list.

For most people, the "dog pound" is a familiar place to find unwanted pets. Local government-run animal control facilities and animal shelters take in stray and unwanted animals and usually house them for a set period of time. These facilities that must take in any animal must euthanize animals when space runs out. In contrast, groups that can be selective about which animals they accept don't have to euthanize animals due to lack of space. These groups are called "no-kill."

County shelters may or may not offer medical care. Some facilities spay or neuter animals before adopting them out, while others require people to alter the pets within a certain timeframe following the adoption.

Foster-based rescues often depend heavily on the Internet or remote pet adoption sites. Usually these all-volunteer groups keep unwanted animals in private homes until they are adopted. Because these groups do not euthanize animals except in cases of severe medical or behavioral problems, they are usually full. These organizations may comprise a large group of people or a single home. To meet one of these animals, prospective adopters usually schedule an appointment or come to an adoption day held at stores like Petco and Petsmart. In the next section, we'll take a look at the groups on Petfinder, and how these groups use the site to save pets.

Thanks to Petfinder Vice President Kim Saunders, the volunteers of the rescue group LIFE for Pets, and the members of the Germanshepherds.com discussion forum, for their assistance with this article.