The Arrival of Hawkeye 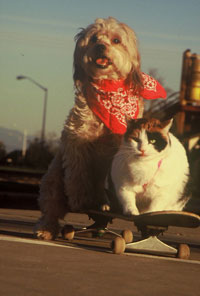 Mutley and Hawkeye set out to surf the asphalt waves of Redding, Calif.
Photo Courtesy of Gene Alba

Alba and Mutley were a happy scuba diving duo, exploring the shallow waters of the Caribbean and Alba's backyard pool on a regular basis. Things changed about 10 years ago when the pooch alerted Alba to some trouble outside their house. Mutley led her owner to a young cat that was tangled up in chicken wire. The female calico cat had the wire tight around her neck and was near death. Alba acted fast -- he got some pliers and cut her loose, performed mouth-to-mouth and saved her life. He named his new addition Hawkeye, nursed her back to health and quickly found that Mutley had a new best friend.

The unlikely pair became inseparable -- playing together, sleeping together, skateboarding together and even bathing together. Hawkeye first let Alba know she didn't mind water when she started jumping into the bathtub with Mutley. Before long, Hawkeye began to show a growing interest in her buddy's adventures in the swimming pool, too. One day when Mutley was enjoying a swim, Hawkeye took the plunge herself and did her best "cat paddle."

Alba explains that as long as Hawkeye can keep her face dry, she doesn't mind water. His theory is that she wants to be close to Mutley so much that she tolerates what most cats avoid. Then there's the matter of Hawkeye's figure. The kindest way to describe her is that she's a cat of generous proportions. Alba thinks that when Hawkeye was spayed there was an error in the procedure, which causes her belly to hang down too low. Regardless of the reason, swimming became a great way for Hawkeye to get some exercise without putting stress on her joints.

Hawkeye's newfound interest in swimming led Alba to the logical next step -- building a scuba rig for his rotund little girl. But the process of designing a wet suit for a heavy cat wasn't an easy prospect. Alba needed to make sure the wet suit didn't squeeze Hawkeye's body too much. He also needed to calibrate the system so that, like Mutley, the cat would remain underwater but still be able to float.

Clean out the litter box and click forward to the next page to see exactly how Alba managed to turn his beloved Hawkeye into Scuba Cat.

Kitty's Got the Bends

Decompression sickness, or the bends, is a symptom that scuba divers face when they ascend to the surface too rapidly. When you dive, pressure on the body increases, which causes excess nitrogen and oxygen to dissolve in the bloodstream. Most of the oxygen is absorbed by tissue, but not the nitrogen. The dissolved nitrogen is what causes the bends. If you ascend too quickly, the nitrogen leaves your blood too fast and forms bubbles. These bubbles block tiny blood vessels. This can lead to strokes, heart attacks, joint pain and ruptured blood vessels in the lungs. Divers avoid the bends by following the recommended ascension rate. Alba and Mutley don't need to worry about the bends: They stay close enough to the surface of the water, which results in a smaller amount of pressure on their bodies.

You can learn more about the bends in What if my scuba diving equipment failed?