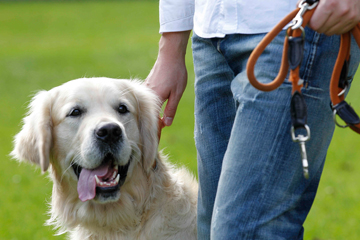 Sensors could allow dogs to "tell" us all kinds of things.
Agency Animal Picture/Getty Images

In the fall of 1804, John James Audubon — the French-born frontiersman who would later become famous for his wildlife depictions and conservation efforts — tied a silver thread to the leg of an eastern phoebe before it migrated for winter. The next spring, the bird returned, sporting the thread and an answer to Audubon's query about whether it would return to the same spot [source: Rhodes].

In the two decades that followed, banding, tagging, and monitoring critters like animals, birds, and reptiles with radio-transmitting devices became a routine way to track their whereabouts. And that was just the beginning. Today wearable technology has gone to the dogs. There are more high-tech ways to gather information about the family pet than ever before, including wearable devices that may help us understand what our pets are thinking and feeling and help us train them more efficiently.

According to tech-analysis firm Juniper Research, global retail revenue from smart wearable devices is expected to reach $53.2 billion by 2019 [source: Smith]. This number includes not only the wearable tech worn by humans, but, increasingly, the tech devices worn by dogs, too.

Take the next generation of dog collars and tags, for example. These 2.0 (dare we say 3.0?) devices use a variety of tones and vibrations that can be activated by remote for training purposes. Want to teach your dog to stay? Associate a specific collar or tag vibration to the command and voila! — soon you'll having Fluffy sitting with a tap of a smartphone app.

Some day, a wearable device might even lead your dog on his walk. The GPS and Vehicle Dynamics Lab at Auburn University is developing a doggy device that conveys direction-oriented commands over long distances without human contact. While this has obvious applications for busy pet owners, it also could offer a way for dogs to deliver medical supplies in combat settings or undertake covert surveillance operations [source: Auburn University].

In the meantime, a joint project of the Georgia Institute of Technology and Google Glass is taking a closer look at ways to use technology to train working dogs. The FIDO (facilitating interactions for dogs with occupations) device is a doggy vest with a built-in microprocessor that is meant to make communication between dog and handler clear and easy. The dog wearing the vest activates different sensors by biting, tugging or putting his mouth near the sensors, which then transmit verbal commands handlers can hear through an earpiece. A bomb-sniffing dog, for example, could tell a handler exactly what kind of bomb the dog has discovered — all while the handler is a safe distance away. For pet parents, the wearable tech could allow trained dogs to "tell" us when they're hungry or need a walk [source: Metz].

10 Best Family Dog Breeds
The Lowdown on the Lion-like Leonberger
Why Do Scent Hounds Have Long Floppy Ears?